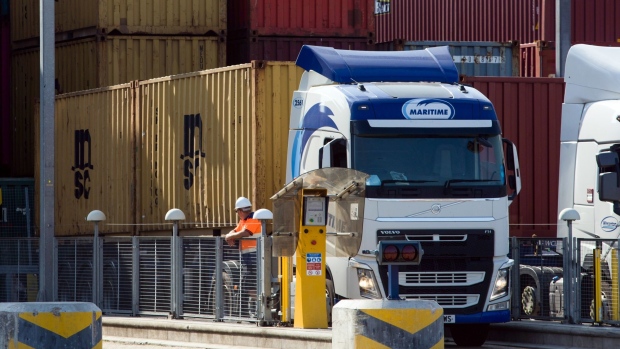 An employee stands next to a truck carrying a shipping container on the dockside at London Gateway port, operated by DP World Plc, in Stanford-le-Hope, U.K., on Tuesday, Sept. 22, 2020. France said the European Union should keep pursuing a free-trade agreement with the U.K. while warning that any British violation of the Brexit agreement would end the push. , Bloomberg

The logistics industry slammed a government warning that 7,000 trucks could be backed-up at the U.K. border after Brexit, saying its operators shouldn’t be painted as “villains” when they haven’t been given the means to prepare.

“Don’t start pointing the finger of blame in our direction when you have still to provide all of the tools to do the job,” Robert Keen, director general of the British International Freight Association, said in an email. “Give our members all the information they need, and systems that actually work, and they will be more than able to do what is necessary.”

BIFA’s angry reaction followed a letter from Cabinet Office minister Michael Gove which urged traders to prepare for new border controls when the U.K. leaves the EU’s single market and customs union at the end of the year. The letter said as many as 70% of trucks may not be ready to enter the EU and the flow of freight between Dover and Calais -- a vital trade artery -- could be cut by as much as 80% below normal levels.

“The biggest potential cause of disruption are traders not being ready for controls implemented by EU Member States on 1 January 2021,” Gove wrote in the letter, dated Tuesday and seen by Bloomberg News. “It is essential that traders act now and get ready for new formalities.”

Preparing for customs checks on trade with the EU is one of the biggest logistical challenges facing Boris Johnson’s government. Failure risks major disruption to commerce with the U.K.’s largest trading partner when the Brexit transition period ends on Dec. 31.

The government’s fear is that trucks will be stopped by EU officials for failing to have the correct post-Brexit paperwork, causing supply chain chaos and adding to the economic pain of coronavirus.

Key to the government’s plan to minimize disruption is a new IT system -- the Smart Freight Service -- which would issue trucks with a permit indicating that they have the right paperwork to enter the EU. Trucks entering Kent without a permit would be fined 300 pounds ($382). However, the government acknowledges the system will still be in testing mode in January, and users risk encountering bugs.

Keen said the government is “getting their retaliation in first.”

“With just over 14 weeks to go before the end of the Brexit transition period, traders and logistics providers are still waiting for so much information and clarity from the government,” he said. They “are shocked by the lack of consistency in government policy, systems planning and procedures.”

Gove’s letter is the first time a government minister has put their name to the predictions of significant upheaval at the U.K.-EU border. Last week, the Guardian newspaper reported on a briefing document from civil servants which warned of long lines and disrupted freight flow and forms the basis of Gove’s intervention.

“I would urge the government to get ready and ensure the systems are in place,” Rachel Reeves, Labour’s shadow cabinet office minister, told Bloomberg TV on Wednesday. “A shock to our economy on top of the pandemic and everything we’re going through now would be an awful thing to inflict upon British businesses and European businesses.”