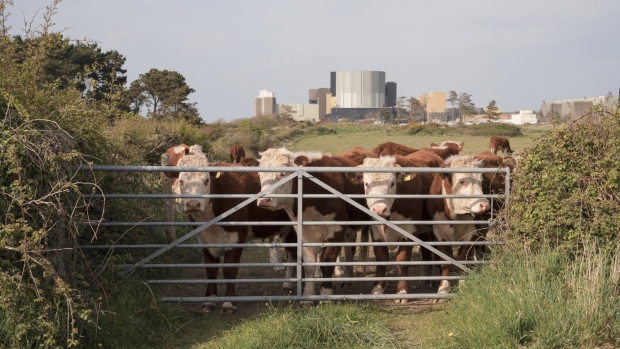 (Bloomberg) -- The complex of grey and beige rectangular blocks on the horizon have an unusual security deployment. Four cows stand guard at an iron gate at the field that leads up to what’s now a defunct nuclear power plant.

The site on Anglesey is a relic of more industrious times for the island off Wales’s northwest coast. The reactors began decommissioning seven years ago, not long after an aluminum plant shut a few miles away. Hundreds of jobs disappeared and Anglesey was left to rely on tourism, its port and agriculture, including cattle rearing.

Yet the outpost in the Irish Sea is where the UK’s urgent need to redefine energy policy, the government’s political agenda of reviving neglected regions and the reinvention of one of the country’s most fabled companies converge. Should the plans come to fruition, Anglesey would turn into a sort of laboratory for Britain 2.0.

The Wylfa site in North Wales is one of the top contenders to host a so-called small modular reactor, or SMR, a component of Prime Minister Boris Johnson’s plan to ramp up nuclear energy production. At the forefront of the new technology is Rolls-Royce Holdings Plc, whose SMR business received 210 million pounds ($260 million) from the government to develop it.

Various plans to revive the island’s local economy have come and gone in the past, but the energy crunch that’s hammered household budgets across Britain — now exacerbated by the war in Ukraine — could potentially make the latest idea stick. The carrot for Anglesey is that the island of 70,000 people would be part of the government’s flagship policy to “level up” the economy by increasing employment.

“People that say it’s only those jobs at that power station, well, it’s more than that,” John Idris Jones, a former Wylfa chief engineer and now consultant to the nuclear industry, said at the site as the wind swept in from the sea. “It’s also about the teachers in the local schools, it’s about retention of young people, it’s about the farmers supplying the food. It’s the whole wider ecosystem around it really.”

The government’s blueprint for the next generation of energy strategy published in April envisages a new body called Great British Nuclear to boost capacity. The target is for 25% of projected electricity demand to come from nuclear by 2050, some of which would come from dozens of SMRs eventually dotted around the country.

For Anglesey, it’s the chance to improve its prospects. Exclusive analysis by Bloomberg News of UK regional inequality shows that the island is among the places that have fallen further behind London and the southeast since the government unveiled its “levelling up” agenda in 2019. That’s based on metrics including salaries, broadband coverage and life expectancy, though productivity has improved.

Economic inactivity is the second-highest in Wales, in part because of a higher proportion of retirees and an exodus of youth seeking work elsewhere. Less than half of over 50s now speak Welsh because of inward migration.

Hopes for a Nuclear Future

Most of the companies working on SMRs are still in the early stages of development, leading some in the industry to refer to them as “Powerpoint reactors,” that is, still on the drawing board.

Should the technology work out, though, an SMR would bring hundreds of well-paid skilled jobs to Anglesey and have a knock-on effect across the island, said Virginia Crosbie, the Conservative local member of the UK Parliament.

She won the district in 2019, held the previous 32 years by Welsh nationalists Plaid Cymru and then the Labour Party, when Johnson trounced the opposition with his promise to deliver Brexit and an economic dividend. Crosbie’s campaign championed the regeneration of Wylfa, which is also seen by the industry as a prime site for a new, larger nuclear power station.

“Bringing an SMR to the island would be a true reflection of how the levelling up agenda can bring benefits to disadvantaged areas,” Crosbie said at her office in Holyhead, Anglesey’s biggest town whose port is now on the post-Brexit sea border with Ireland.

The trick will be turning those “fine words of policy” into action, said Jones. Local anti-nuclear campaigner Robat Idris says the island’s lack of productivity is the legacy of the various industries that have cycled through the area, promising jobs before ultimately packing up shop.

Anglesey has played host to many of them, for sure. They range from the copper mine at Parys Mountain, which the local tourist office says briefly produced the world’s biggest haul in the 18th century, to the aluminum smelter and the nuclear site in modern times, The smelter shut in 2009, while the reactors were switched off in 2015.

“When you have an area which has essentially been economically neglected for generations, centuries then in desperation, people will accept whatever’s going,” said Idris, sipping a coffee at a café at Holyhead marina.

Nowadays, the local economy is reliant on tourism, agriculture and the work provided by the railways and the Holyhead port. A plan to reopen the Wylfa site collapsed in 2020 when Hitachi failed to reach a funding deal with the government.

Since then, developing the nuclear industry has got more urgent and the UK government has promised that a new nuclear power station will be built at Wylfa.

That’s where Rolls-Royce comes into the equation. The company is looking at Wylfa and Trawsfynydd, another location on the Welsh mainland, as potential flagship sites for its small modular reactors.

SMRs are smaller than conventional nuclear power plants, generally producing up to 300 megawatts of energy, though Rolls-Royce’s are bigger at 470 megawatts. They have simpler designs and are set to be quicker and cheaper because they can be built in a factory before being transported to a chosen site. Rolls-Royce wants to switch on its first reactor by 2029.

“Many of us working in SMRs are absolutely of the view that the time for this technology has come,” said Paul Stein, chairman of Rolls-Royce’s SMR business.

The venture is part of the company’s plan to diversify away from its traditional work building and servicing long-haul jet engines after international travel was hit by the pandemic. The company plans to start building on existing nuclear sites, such as Wylfa before moving on to repurposing coal and gas sites that have the power infrastructure to support nuclear but aren’t big enough for full-size reactors.

Rolls-Royce is in a good position to deliver for Anglesey because of its experience powering the Royal Navy’s nuclear submarine fleet for the past 60 years. This helps the company be confident in its design without compromising military defense secrets, said Stein.

That’s not to say the hurdles aren’t significant, especially given the technology is at an early stage. There is also skepticism about just how many local jobs SMRs can create. A person familiar with Rolls-Royce’s thinking said that the company expects hundreds of new positions at sites such as Anglesey, though the construction work will likely be done by more of an itinerant workforce.

“We have been here before, promises being made about jobs by other companies and by government for that matter, which have come to naught,” said Idris, the anti-nuclear campaigner. “So the local people are very much more suspicious now of promises being made.”

But the advocates of nuclear’s ability to bring change say it could have a dramatic impact on the local economy. And if anywhere deserves it, it’s Anglesey, said Crosbie. “They’d had decades of no jobs and everything closing down,” the parliamentarian said. “What we want is really good quality jobs.”