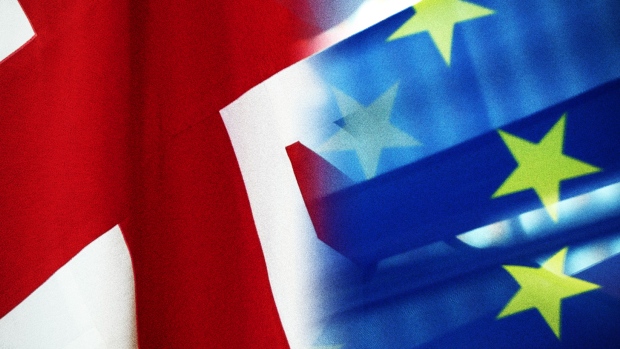 Freight trucks wait to board a cross-Channel ferry from the Port of Calais, France, on Monday, April 1, 2019. Photographer: Chris Ratcliffe/Bloomberg , Bloomberg

Today in Brexit: As Boris Johnson tries to stick to his pledge of delivering Brexit by Oct. 31, help from another EU member state may be on the way.

What’s Happening? Hamstrung by Parliament and under pressure from the courts, Prime Minister Boris Johnson is still trying to devise a fail-safe plan to complete Brexit by Halloween. EU diplomats fear Hungary might help him out, write Ian Wishart, Marton Eder and Zoltan Simon.

A rebel EU leader could veto any Brexit extension, and European officials privately worry that Johnson will try to persuade Hungarian Prime Minister Viktor Orban, who’s had his own clashes with Brussels over democratic standards, to take his side. In an interview, Hungary’s foreign minister, Peter Szijjarto, left the door open to a vote against postponing  Brexit, noting that other EU members may also be considering rejecting a delay. A unanimous vote is required to extend the negotiating period past the Oct. 31 deadline.

It's an intriguing prospect for Johnson. If the EU refused an extension, he would significantly boost his chances of getting a Brexit deal through Parliament. The House of Commons would face the stark choice of crashing out, accepting Johnson's withdrawal terms or cancelling Brexit altogether.

Any Brexit help would be welcome at this stage. Outgoing House of Commons Speaker John Bercow has said Johnson would be acting like a "bank robber" if he refused to respect a law that likely requires him to delay Brexit. Bercow even suggested the U.K. may need a U.S.-style constitution to stop the government from thwarting Parliament.

Don't Stop Now | Regulators including the European Banking Authority and European Securities and Markets Authority have told the financial industry it shouldn’t slow down preparations for a messy Brexit, even if they’re tired of the issue.

Misleading Ads? | A cross-party group of lawmakers says the government is misleading the public with an information campaign that says Brexit will happen on Oct. 31, the Guardian reports.

France Gears Up | French customs officials are conducting dry runs for a no-deal Brexit, which would see British exports treated like those of China or the U.S., according to the FT.

Quit While You're Ahead | Britain’s pro-Brexit supporters should unite behind any departure agreement Johnson achieves, for fear of risking the entire project, Iain Martin writes in the Times.

To contact the author of this story: Joe Mayes in London at jmayes9@bloomberg.net

To contact the editor responsible for this story: Anne Swardson at aswardson@bloomberg.net, Iain Rogers