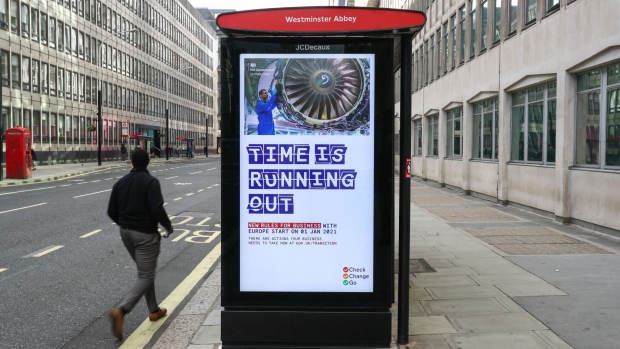 A pedestrian passes a U.K. government Brexit advertisement at a bus stop in London, U.K., on Thursday, Oct. 22, 2020. The U.K. and the European Union will resume talks over a post-Brexit trade deal, less than a week after Boris Johnson suspended the discussions, amid growing signs an accord is in sight. Photographer: Simon Dawson/Bloomberg , Bloomberg

European Union and U.K. negotiators made progress this week toward resolving some of the biggest disagreements that have long bedeviled the Brexit talks, raising hopes that a deal could be reached by early November, according to people familiar with the discussions.

The two sides have begun work on the text of an agreement on the level competitive playing field, and are close to finalizing a joint document covering state aid, said the people, who asked not to be identified because they weren’t authorized to speak publicly. The U.K. and EU have also moved closer to deciding essential aspects of how any accord will be enforced, the people added.

While the differences between the two sides are still substantial -- particularly on the level playing field, enforcement and fishing -- the progress on the text is a sign they are a step closer to breaking the deadlock after seven months of negotiations. The pound pared its declines against the euro and the dollar, trading down 0.5 per cent at US$1.2995 by 4:08 p.m. in London, as traders wait for concrete signs of progress.

On Thursday, the talks will move to Brussels, where, if negotiators can narrow their remaining differences sufficiently by Nov. 3, the ball will then pass to U.K. Prime Minister Boris Johnson and European Commission President Ursula von der Leyen for them to broker a final compromise, one of the people said.

Without an agreement, millions of consumers and firms will be hit by the cost and disruption tariffs, quotas and full customs checks will bring when Britain leaves the EU’s single market and customs union on Dec. 31.

After weeks of stalemate, there has been a shift in mood and gears in recent days, the people added. With both sides eager to reach a deal, the U.K and EU are now working hard to finalize as many chapters of a potential agreement as possible.

Despite the improved mood and the progress on the texts, EU officials stress they view any deal as a single agreement where nothing is agreed until everything is agreed. And the two sides are still far apart on a number of issues.

Fishing remains one of the major obstacles to an accord, with both sides still at loggerheads over what rights EU boats will have to British waters and their share of the quota. France and other coastal states such as Belgium are pushing strongly for continued access to waters between six and 12 miles off Britain’s coast -- something they enjoyed under an agreement that pre-dated Brexit, according to an official familiar with the French government’s thinking.

“The face of Brexit will be the face of our fishermen, so we must be able to tell them that their interests were protected,” France’s Europe minister, Clement Beaune, told the Senate on Wednesday. “There is no reason for us to give in to British pressure.”

Negotiators see bridging these disagreements as an increasingly political issue that will require intervention from Johnson and French President Emmanuel Macron. The EU has tied British access to Europe’s transport and energy markets to European access to U.K. waters.

Elsewhere, progress has been made on welfare rights, customs and air travel -- although some disagreements in these areas are still to be resolved, one of the people said.

If the two sides fail to resolve enough of their differences by early November, the negotiating teams would then have to consult their political leaders in London and across the EU on whether to continue the talks or terminate them, the people said. With the European Parliament required to ratify any accord, the final deadline for negotiators to reach a deal is the middle of November.