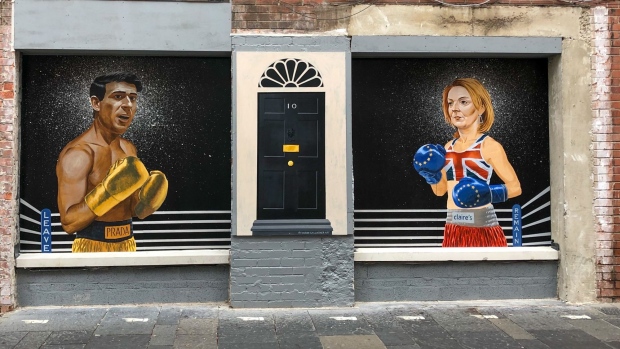 Brexit dominated the discussion as Liz Truss and Rishi Sunak took their leadership campaigns to Northern Ireland, with both candidates to be the next UK prime minister vowing to change the divorce settlement with the European Union and protect the integrity of the country.

After years of dominating the UK political landscape, Brexit has been reduced to a minor issue so far in the campaign to succeed Boris Johnson, with soaring energy bills and the cost-of-living crisis looming large over the contest. But at a leadership hustings in Belfast on Wednesday, the fallout from Britain’s exit from the bloc was again thrust into the foreground.

The main point of contention remains the Northern Ireland protocol, which keeps the province in the EU’s single market for goods to avoid imposing a hard border on the island of Ireland. The region’s power-sharing government is currently suspended as the Democratic Unionist Party refuses to participate until the protocol is removed, because it treats Northern Ireland differently from the rest of the UK.

For Boris Johnson’s Successors, Brexit Is Anything But Done

It’s a dilemma the next prime minister will have to deal with in short order after they come to power on Sept. 6. That’s because the Northern Ireland Secretary may be forced to call another regional election by the end of October if the stalemate continues. It will be the second this year, after nationalist party Sinn Fein became the biggest party in Northern Ireland’s Assembly for the first time in May.

Sunak told members that “Northern Ireland’s place in the UK is being threatened” by the protocol, while Truss said that until the issue is sorted, “we are not going to get Stormont back up and running.”

Truss has sought to resolve unionist discontent with the protocol, which is also causing some disruption to trade within the UK, by introducing legislation to scrap large parts of the Brexit agreement and replace it with new rules on customs checks, tax and arbitration. Power-sharing will be restored as the bill progresses through parliament, she said.

It’s been applauded by many conservatives and unionists but has exacerbated tensions with the EU who quickly moved to start legal action against the UK. Many businesses in Northern Ireland are also benefitting from the region’s unique access to both the EU’s single market and the UK’s internal market and worry that Truss’s bill increases uncertainty.

Sunak said he would restore power-sharing by fixing the protocol and resolving differences between the parties. While the bill goes through Parliament, he has vowed to talk with the EU, Ireland and France to find a “negotiated outcome” which he says will be far quicker than waiting for the law to pass.

This week, Truss’s department launched its own formal dispute proceedings against the EU accusing it of breaking the post-Brexit trade deal by blocking its access to three international science programs. While Brexit rhetoric serves as a way of re-uniting a divided Conservative party, the UK risks triggering a trade war with its biggest and nearest partner.

Asked whether she would accept a compromise deal with the EU, Truss said she wouldn’t accept anything that doesn’t lead to UK courts being the ultimate arbiter over disputes in the region, free-flowing trade within the UK, and the ability for Northern Ireland to benefit from UK-wide tax changes.

“It might take time to get this bill through the House of Lords but the sooner we start, the sooner we will finish, and I am determined to get it done as quickly as possible,” Truss said.