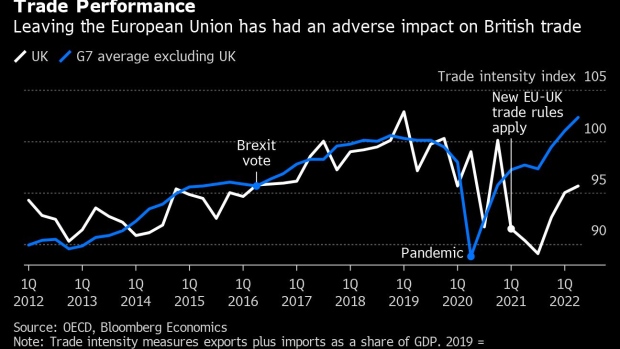 A shopper loads their car with food shopping at an Asda supermarket in Folkestone, UK, on Monday, Nov. 14, 2022. The Office for National Statistics are due to release the latest UK CPI Inflation data on Wednesday. Photographer: Chris Ratcliffe/Bloomberg , Bloomberg

(Bloomberg) -- Brexit has added £210 to food bills for the average UK household, with low-income families hardest hit, according to research from the London School of Economics.

Over the two years through the end of 2021, food prices rose 6% as a result of additional business costs caused by so-called non-tariff barriers in the form of border checks, the study showed.

The UK formally left the European Union in January 2020 and exited the single market and customs union in January 2021. Moving to a free trade deal ensured no direct tariffs were imposed.  But customs checks, rules-of-origin requirements and sanitary measures for trade in animals and plants were introduced that all added to friction for importers and exporters.

“In leaving the EU, the UK swapped a deep trade relationship with few impediments to trade for one where a wide range of checks, forms and steps are required before goods can cross the border,” said Richard Davies, a professor at Bristol University and co-author of the study. Firms faced higher costs and passed most of these onto consumers.”

Businesses bringing in from the EU have passed 50% to 88% of those costs to consumers, the researchers found. That added 3% a year to consumers’ food bills -- totaling £5.8 billion over the two years.

For the poorest households, higher food prices translate into a Brexit-induced increase in the overall cost of living of 1.1%, compared with 0.7% for the richest 10th of households, the LSE team found. It drew on  micro data on trade flows as well as consumer prices.

The calculations follow comments on Wednesday from Huw Pill, the Bank of England chief economist, who said Brexit is partly to blame for high inflation by causing labor shortages, strengthening pricing pressure among firms and weakening the economy.

Inflation is running at more than five times target at 11.1%. Food prices have risen 16.5% in the past year, according to the Office for National Statistics.

The researchers, at the LSE’s Centre for Economic Performance, said food producers have benefitted from less competition, but their gains “are outstripped by the loss to domestic consumers by more than £1 billion.”