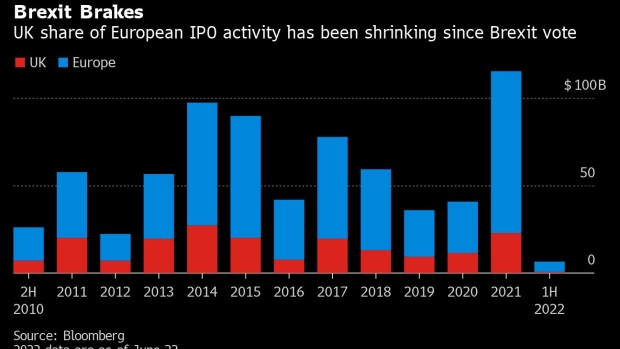 (Bloomberg) -- Boris Johnson’s vision for London to boost its standing as a global financial center and stock-market listings hub post-Brexit hasn’t exactly panned out so far.

Since the shock vote to split with the European Union in June 2016, initial public offerings have been losing steam in the UK. They made up 30% of total listing proceeds in Europe, down from 40% in the six preceding years, data compiled by Bloomberg show.

The UK has been on a charm offensive to attract more IPOs, changing some of its previously contentious listing rules like allowing founders to retain control of their business even after it goes public. The government has lobbied tech companies from Swedish payments firm Klarna to SoftBank Group Corp.-backed chipmaker Arm to list in London.

To little avail, so far. British startups are flocking to the deeper pockets and higher valuations to be found in New York, while listings in the UK are at their slowest in more than a decade. Optimism after a last-minute Brexit deal at the end of 2020 was short-lived, as it left many regulatory issues unresolved.

“The lack of a financial services accord has led to the flight of some European funds, and broader economic malaise means there are simply fewer floats than before,” said Christopher Raggett, co-head of corporate finance at UK broker FinnCap Group Plc.

A string of high-profile flops over the past two years has also done serious damage to investor confidence in London IPOs, with the likes of Deliveroo Plc, Wise Plc and THG Plc all down more than 60% since going public.

Now, an intensifying cost-of-living crisis, soaring inflation and the looming prospect of a recession in the UK are piling more pressure on London’s already bleak listings landscape.

And any pick-up in activity will likely take many months, with much depending on how the first companies out the gate fare.

“I can’t see anything coming to market before September at least,” said Alexandra Jackson, manager of the Rathbone UK Opportunities Fund. “We will need something that’s a surefire hit to reopen the market and reignite enthusiasm.”