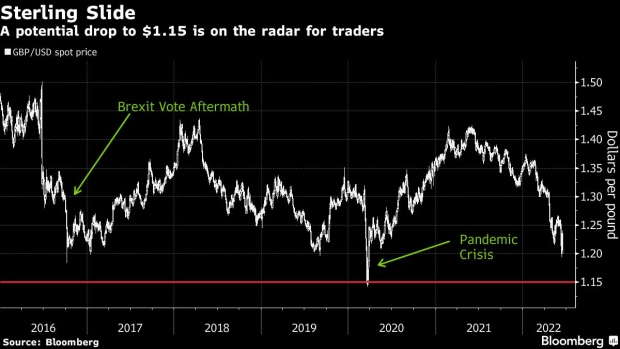 A U.K. national flag flies beside European Union (EU) flags outside the Berlaymont building in Brussels, Belgium, on Wednesday, Dec. 9, 2020. Boris Johnson is heading into what may be the most important meal of his life: a dinner with the head of the European Commission in Brussels that could make or break a post-Brexit trade deal. Photographer: Geert Vanden Wijngaert/Bloomberg , Bloomberg

(Bloomberg) -- Brexit is an albatross hanging around the neck of the UK’s markets.

Britain’s shock vote to split with the European Union six years ago is still depressing the country’s assets and making it harder to recover from this year’s global market meltdown. The pound has dived nearly 10% in 2022 to be one of the worst-performing major currencies, sterling company bonds are on the longest losing run ever and years of stock malaise has made UK Plc cheap for takeovers.

The outlook isn’t much better given the country faces a recession. That’s because the divorce is exacerbating the economic hit, driving inflation to a 40-year high, lopping 4% off productivity and leaving the UK short of a million workers.

“Sterling has few friends when you wander around seeing clients,” said Kit Juckes, chief FX strategist at Societe Generale SA, describing the currency as a “basket case.” “It’s forecast to have weaker growth, higher inflation, and a bigger current-account deficit than the US, euro zone or Japan next year, not so much trilemma as tragedy.”

It’s going to be a tough ride for the country’s markets in coming years unless the UK can overcome the legacy of Brexit, from political instability to structurally higher inflation and lower investment flows.

“In the six years since the Brexit vote, sterling has not even come close to pre-referendum levels,” said Geoffrey Yu, senior currency strategist at Bank of New York Mellon. “That speaks for itself.”

Fund managers at BlueBay Asset Management, State Street Global Advisors and Invesco are among those betting against the pound. Options traders are also negative. A Bloomberg MLIV survey found 76% of respondents expect the currency will sink further to $1.15 before any rebound to $1.35.

UK Set for Recession and Fresh Selloff of Everything: MLIV Pulse

The short-term outlook is likely to be determined by the Bank of England, as it tries to hike rates to calm inflation without tipping the economy into a recession.

“Brexit is exacerbating for UK corporates an inflation problem that most developed economies face,” said Pierre Verle, head of credit at Carmignac. “They’ve lost a flexible supply of labour. It’s too early to measure the impact through financial reports or company analysis, but you can experience it traveling to or from London, eating out or hiring -- be it an intern, a PhD or a nanny.”

Brexit’s disruption to immigration and supply chains means the UK will be stuck with searing inflation for years, according to strategists at Wall Street’s top banks. That leads to higher interest rates, a problem writ large in the UK’s corporate bonds.

Brexit’s Legacy Is Hotter UK Inflation Risk for Years Ahead

Rising borrowing costs are hurting the debt of firms such as British Airways-owner IAG SA and Jaguar Land Rover Automotive Plc. Sectors such as real estate or those sensitive to the economic cycle such as industrials could see “more pain,” said Janet Mui, head of market analysis at Brewin Dolphin.

With the BOE still expected to jack up interest rates steeply this year, the cost to protect against UK company default is spiking. The number of firms filing for insolvency is already climbing.

“Inflation is higher in the UK, which means the BOE has to be more restrictive than the European Central Bank, creating a downside for UK credit,” said Kyle Kloc, a portfolio manager at Fisch Asset Management. “Also, the relationship with the EU and Northern Ireland is reaching a tense point again and that could be an issue for certain sectors -- food retail for example, and manufacturers who import perishable goods.”

British supermarkets, serving consumers stressed by a cost-of-living crisis, are lagging their European counterparts: the likes of Asda, Marks & Spencer and Sainsbury’s all have higher borrowing costs than European peers.

Not all of these problems can be laid at the door of Brexit. Governments around the world are now facing rampant inflation.

Yet the UK’s problems are longer term, as seen through the underperformance of the stock market. The FTSE 100 Index is down about 7% in dollar terms since the referendum, whereas the S&P 500 has jumped 79%, the MSCI All-Country World Index has gained 46% and MSCI Emerging Markets has added 19%.

That’s hampering the ability of London to attract new stock listings. The cheap valuations mean the UK is now the main target in Europe for activist investors, who specialize in forcing change at firms they deem to be underperforming. They are targeting shake-ups at major companies such as consumer group Unilever Plc, miner Glencore Plc and drugmaker GSK Plc.

There are some signs of improvement. The FTSE 100 is set to gain about 5% by the end of this year, according to the average forecast among strategists surveyed by Bloomberg. Bank of America Corp.’s fund manager survey for June showed the UK is the favorite equity market in Europe, with only 8% of global respondents being underweight, compared with 26% for Europe.

While some funds may be willing to bet on a long-term recovery, there’s little likelihood of the Brexit hangover wearing off just yet.

“If you’re currently staring at a recession probability of 50% in the US and in Europe -- I think we are already experiencing it in the UK,” said Mark Dowding, chief investment officer at BlueBay Asset Management. “On a number of levels, we think the UK isn’t in great shape.”