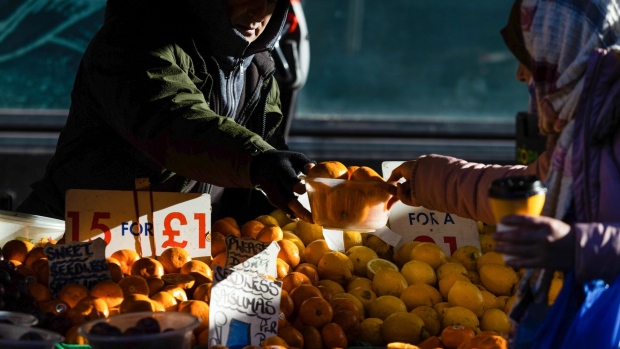 A stall holder serves a customer with fresh fruit and vegetables at a market stall in Croydon, Greater London, U.K., on Monday, Jan. 17, 2022. Inflation figures for the U.K., due on Wednesday, are likely to hold steady in December, before peaking in April at around 6.5%. , Bloomberg

Britain’s departure from the European Union may make the economy more sensitive to inflation, a Bank of England rate setter said.

“Brexit has reduced the UK’s potential output,” said Michael Saunders, one of the nine members of the Monetary Policy Committee. “It may also have increased the extent to which, if there is excess demand in the economy, that inflation picks up. But it’s wrong to think that this will be a cause of persistently high inflation in the UK.”

The comments to lawmakers in Parliament on Monday add to the debate about the economic impact of Brexit. BOE Governor Andrew Bailey said there’s been a drop in trade and the size of the labor force since the coronavirus pandemic started, and it’s hard to determine how much of that is driven by Brexit and how much by the virus and other factors.

“If the UK becomes a more closed market because of Brexit, then it becomes somewhat inflexible,” Bailey said. “The biggest impact on the labor market appears to be Covid. There is a net migration number there as well, but it’s a small number. It’s very hard to separate the impact of Covid and Brexit because both have reduced the flow of people across border.”