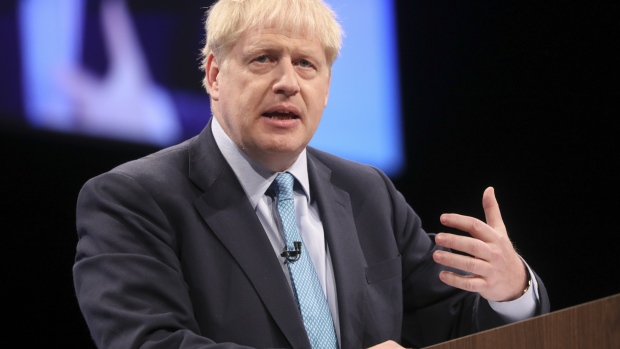 Boris Johnson’s new Brexit plan will face the scrutiny of two critical groups of skeptics on Thursday, one in the U.K. Parliament and another at the European Commission.

The British prime minister is optimistic he’s finally got enough support from Tory hardliners to win the backing of lawmakers in Westminster. In Brussels, however, officials said Johnson’s proposals are still unacceptable and there’s little chance of a deal by Oct. 31 unless the U.K. makes significant additional concessions.

The EU’s base case is now that Brexit has to be delayed again, even though Johnson has vowed not to seek an extension, the officials said. After speaking to the U.K. leader Wednesday evening, Irish Prime Minister Leo Varadkar said the proposals “don’t meet the agreed objectives.”

With less than a month to go before Brexit day, Johnson on Wednesday unveiled a compromise package that aims to satisfy both the European Union and the arch euroskeptics in his party. Within hours, his de facto deputy, Michael Gove, told ITV’s Robert Peston he’s confident the proposal can win a “pretty solid majority” in Westminster.

But the EU is set to reject the plan in its current form, a European official said. While it gives negotiators something to work with, there’s not enough time left to get it into workable shape, the official added.

According to a diplomatic note from the commission on the proposals for the so-called Irish backstop, they risk damaging the all-Ireland economy and undermining the bloc’s single market. The EU also has big concerns about giving the Northern Ireland assembly a veto.

Johnson’s plan is for politicians in the assembly in Belfast to give its consent for the arrangements every four years. In one area that the Irish government is sure to pick up, it is unclear what would happen if that consent didn’t come -- the whole point of the backstop is to give certainty that there’ll be no border checks in any circumstances.

The EU’s chief Brexit negotiator Michel Barnier will brief ambassadors from the other 27 member states on Johnson’s proposals in Brussels on Thursday afternoon.

Johnson says he will never agree to postponing Brexit again, even if it means leaving without a deal -- risking disruption at ports, to business supply chains, and to the security of food, fuel and water supplies.

On Wednesday, he threatened to walk away from the talks if the EU didn’t agree with his plan to avoid the return of a hard border on the island of Ireland -- what he described as “essentially a technical issue.”

Johnson is hoping he can succeed in getting a deal through Parliament where his predecessor, Theresa May, failed three times. On Thursday, he will present the plan to his cabinet. Then either he or Brexit Secretary Steve Barclay will then take questions on it in Parliament.

BREXIT: Confused about the backstop?

Here's an explanation of what it is and what it means for the U.K., Ireland, and the EU pic.twitter.com/ZIs20MbNrL

His proposal is to ditch the contentious “backstop” arrangement for the Irish border in May’s deal and replace it with a regulatory border in the Irish Sea, effectively splitting Northern Ireland from the rest of the U.K. That’s something May said no prime minister could ever accept, and that the most ardent Brexiteers in Parliament refused to back -- until now.

This time, Steve Baker, chairman of the pro-Brexit European Research Group of Conservative MPs, gave a broad welcome to the proposals, while Northern Ireland’s Democratic Unionist Party, who have been propping up the Conservatives in government, also supported the proposal to replace the “backstop.”

The compromise moves a step closer to a Northern Ireland-only backstop -- something the European Union has long pushed for, said Sam Lowe, senior research fellow at the Centre for European Reform. “If the DUP and the Conservatives now accept the principle of some kind of border in the Irish Sea, it could be possible to get them to go the rest of the way,” he said.

By Wednesday evening, Johnson’s language about this being a “final offer” had softened to a “broad landing zone,” suggesting there could be more room for maneuver.