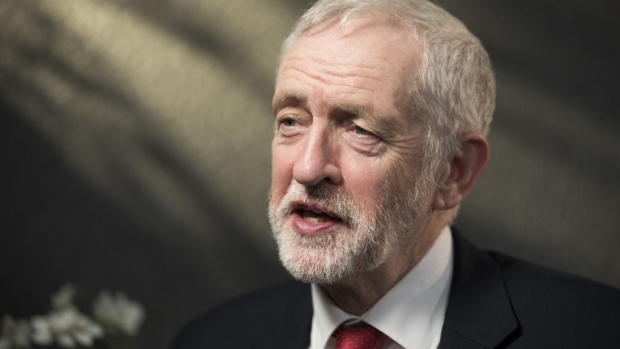 Jeremy Corbyn speaks during a Bloomberg Television interview on the sidelines of the CBI conference in London on Nov. 18. , Bloomberg

(Bloomberg) -- Caught between a Brexit they don’t want and a firebrand socialist they fear, business executives were not impressed after the leading candidates in Britain’s upcoming general election tried to win their support.

Speeches by Conservative Prime Minister Boris Johnson and opposition Labour leader Jeremy Corbyn failed to resonate with attendees at the Confederation of British Industry’s conference in London on Monday.

“These guys should be hanging their heads in shame for the last three years of nonsense that’s gone on,” said Phil Smith, non-executive chairman of IQE Plc, a maker of semi-conductor products. “If that was in business, most of them would be gone by now.”

Smith’s comments captured the mood of executives as they poked holes in Johnson’s Brexit plan while warning against Corbyn’s economic policies, which include nationalizing large swathes of industry. Delegates were divided over which posed a greater threat to Britain: pursuing a hard break from its largest trading partner, the European Union, or embracing a socialist agenda.

The U.K. is heading for its third election in 4 1/2 years on Dec. 12 after Johnson failed to get Parliament to ratify his Brexit deal, and was unable to deliver on his promise to leave the European Union by Oct. 31. Business leaders complain that three years of political paralysis have stalled investment since the Brexit referendum vote in 2016.

When the alternative is a Corbyn-led government, Johnson may not need to try too hard to persuade businesses to embrace the Tories. At the CBI on Monday, the premier rowed back on a plan to cut corporation tax from 19% to 17% in 2020, saying the government could save money and spend more on voters’ priorities like the National Health Service.

For his part, Corbyn confirmed in a Bloomberg television interview that Labour would nationalize the railways, water companies, the electricity grid and Royal Mail Plc, following up on his pledge to take ownership of broadband infrastructure.

Regarding Brexit, CBI boss Carolyn Fairbairn reiterated her concern that there is not enough time for the U.K. to negotiate a new trade deal with the EU before a transitional bridging period runs out at the end of 2020.

With that in mind, she called on Johnson to extend the transition period in order to avoid Britain being forced to trade with the bloc on damaging World Trade Organization terms. Johnson rejected her plea.

“You can’t do a trade deal of any value in that period,” said Ian Wright, chief executive of the Food and Drink Federation, echoing Fairbairn’s view. “There’s not enough time.”

None of the 16 business leaders interviewed by Bloomberg News at the conference gushed about any one candidate but when asked to choose, a few offered a clear view.

Nicola Stopps, chief executive officer of corporate social responsibility consultants Simply Sustainable, said she plans to support the Tories in the election even though she voted to remain in the EU, because Johnson has pledged to pull the U.K. out of the bloc quickly.

Brexit uncertainty is significantly affecting her business advising big firms, and it may force the company to go under, Stopps said. “We have very large clients who are postponing projects,” she said.

“Corbyn is definitely worse,” he said. “And we need to heal the social divisions of Brexit.”

The pro-EU Liberal Democrats struggled to resonate at the conference, even though many executives were sympathetic with the party’s mission to stop. While leader Jo Swinson declared them to be “the natural party of business,” few executives saw them as likely to win many seats.

To contact the reporter on this story: Joe Mayes in London at jmayes9@bloomberg.net

To contact the editors responsible for this story: Rebecca Penty at rpenty@bloomberg.net, Tim Ross