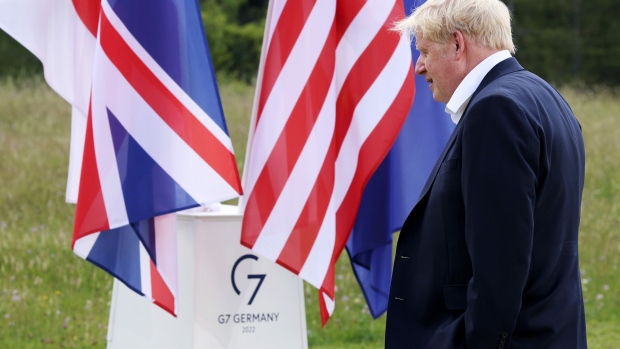 Boris Johnson, UK Prime Minister, at the family photo on the opening day of the Group of Seven (G-7) leaders summit at the Schloss Elmau luxury hotel in Elmau, Germany, on Sunday, June 26, 2022. , Photographer: Liesa Johannssen-Koppitz/Bloomberg

(Bloomberg) -- Boris Johnson’s plan to override the Brexit deal he signed faces a preliminary vote in Parliament at an awkward time, as the prime minister meets European Union leaders at the Group of Seven summit.

Legislation to allow Britain to unilaterally amend the post-Brexit settlement for Northern Ireland will get its so-called second reading in the House of Commons on Monday afternoon, the latest stage in the process to enter law that could potentially take as long as a year if the upper House of Lords digs in.

Even so, the plan has provoked renewed legal action from the EU and again soured relations with the UK’s biggest trading partner. Speaking at the Group of Seven summit in Germany on Monday, Johnson told reporters his proposal could be carried out “fairly rapidly” and he wants it done by year-end.

“We could do it very fast, Parliament willing,” Johnson said.

Proceeding risks a trade war with the EU, because the bloc says the post-Brexit trade agreement is conditional on Britain respecting the terms of their divorce, of which the so-called Northern Ireland protocol was a key part.

The EU’s chief Brexit negotiator, Maros Sefcovic, told reporters during a trip to Oslo on Monday that the UK plans mean “constant uncertainty.”

“What we are communicating to our UK partners is come back to the negotiating table, respect international law,” he said. “Because if the bill would be adopted as drafted, we simply have to keep all options on the table.”

The protocol, agreed by Johnson, created an effective customs border between Northern Ireland and the rest of the UK. Early on, the British government focused on the disruption to trade as its justification to try to dilute it.

More recently, ministers have argued that the rules threaten the region’s fragile politics and peace process, with the Democratic Unionist Party refusing to take its place in Northern Ireland’s power-sharing government unless the protocol is removed.

Monday could also be an awkward moment for Johnson if some of his own MPs express dissent about the plan. The debate and vote is their first chance to air their views on the issue in the House of Commons.

A similar initiative by Johnson to override the Brexit deal in 2020 was then condemned by high-profile Tories including former Prime Minister Theresa May, and some Conservative MPs are likely to speak out again.

Earlier, cabinet minister George Eustice argued that the UK isn’t planning to break its agreement with the EU, but rather bring “clarity to how it should be interpreted.” Legal experts have widely criticized the government’s position as being in breach of international law.