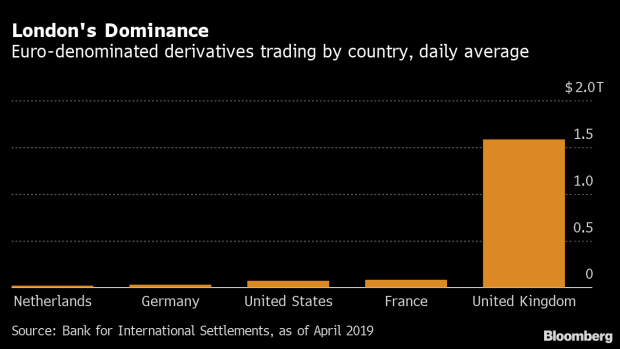 (Bloomberg) -- A battle that threatens London’s dominance in the derivatives market is rearing its head, with European firms at risk of being blocked from using clearinghouses in the British capital within six months.

Industry groups fear that contingency measures already agreed by Brussels officials to grant access until the end of March 2020 don’t defuse the threat posed if the political storm in Westminster pushes the U.K. out of the bloc without a deal on Oct. 31. At risk are derivatives contracts with a notional value of tens of trillions of dollars.

“We again find the relief ending next spring with no solution for continued access,” Walt Lukken, chief executive officer of the FIA, which represents banks, brokers and other firms in the derivatives markets, said in Frankfurt on Tuesday. “These measures are critical because we don’t want this regulatory uncertainty to exacerbate the market volatility that may come with Britain leaving the EU.”

Crucial political talks between the U.K. and the European Union could yet agree a divorce deal. But with the outcome unclear, Lukken said FIA, along with other trade groups, will ask the EU for an extension next month. A solution for clearing needs to be found “well in advance of the end of this year,” said Oliver Moullin, managing director of Brexit at the Association for Financial Markets in Europe.

Clearinghouses stand between the two sides of a derivative wager and hold collateral, known as margin, from both in case one defaults. At issue is a so-called equivalence decision that the EU adopted late last year, which allows EU firms to use derivatives clearinghouses in the U.K. on a temporary basis even in the event of a no-deal Brexit. A sudden loss of access to this critical pillar of the market could pose financial stability risks, officials in Brussels said at the time.

LCH Ltd., a unit of London Stock Exchange Group Plc, may need legal certainty before the end of the year or could be forced to notify EU clients to close their positions. Meanwhile, barely any business has moved out of London, as firms hope that the EU executive will solve the problem for them again, according to Markus Ferber, a German lawmaker in the European Parliament.

“I have the impression that the volume of contracts that have been transferred to the EU in recent months is limited,” Ferber said in an email. “But if there’s a hard Brexit, there can’t be ‘business as usual’ in clearing.”

The issue gained prominence immediately after the Brexit referendum because the U.K.’s departure would take the bulk of euro-denominated derivatives outside the EU, limiting the reach of the bloc’s regulators.

Disrupting access to U.K. clearinghouses would affect EU-based firms that had derivative contracts with a notional value of 60 trillion pounds ($74 trillion) in these venues at the end of 2018, according to Bank of England data. In July, the BOE said the EU’s grant of temporary equivalence resolved the problem for now.

The European Commission, the EU’s executive arm, said it doesn’t think any additional measures to prepare for a hard Brexit are necessary, adding that it will “continue to assess the situation in the markets after the withdrawal date and decide on the appropriate course of action on the basis of the EU legislation in force at the relevant point in time.”

But Robert Ophele, chairman of the Autorite des Marches Financiers, said in an interview last week that European policy makers should reach a decision on granting an extension in mid-November to avoid creating a cliff-edge situation that would disrupt the market.

”It should be discussed for how long, under which conditions. Should every instrument be covered?” Ophele said of a possible extension. “There are quite significant details to discuss.”

Elisabeth Roegele, the deputy president of German financial supervisor Bafin, warned companies that they shouldn’t take an extension of the equivalence finding for granted. Firms mustn’t “rely on a seamless transition,” but need to be prepared “for all possible situations,” she said in Frankfurt.

--With assistance from Nicholas Comfort.

To contact the reporters on this story: Alexander Weber in Brussels at aweber45@bloomberg.net;Silla Brush in London at sbrush@bloomberg.net

To contact the editors responsible for this story: Dale Crofts at dcrofts@bloomberg.net, Marion Dakers, Ambereen Choudhury