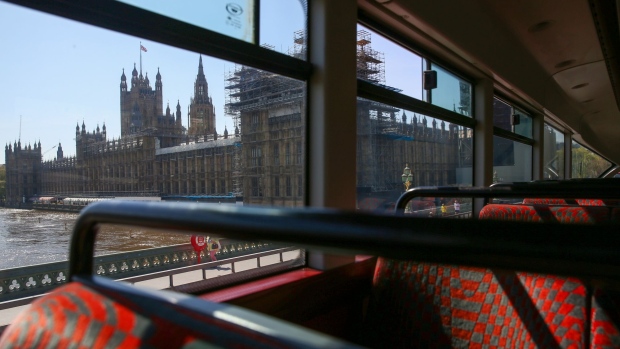 The Houses of Parliament stand in this view from inside a bus in London on April 22. Photographer: Hollie Adams/Bloomberg , Bloomberg

(Bloomberg) -- A dispute over an office in Belfast looks to be small potatoes -- but to Ireland’s likely next leader, it’s a sign Britain is already backsliding on the promises it made before it left the European Union.

The U.K.’s refusal to allow the EU to open an office in Northern Ireland is a “demonstration of bad faith,” according to Fianna Fail leader Micheal Martin, who is set to succeed Leo Varadkar as prime minister next month. For London, the mini-embassy would be an affront to the province’s unionist community.

The spat may be relatively trivial, but it’s a reminder that one of the thorniest issues of Brexit -- how to keep the volatile Irish border free of checkpoints after Britain leaves the single market -- has far from gone away. The wider disagreement threatens to undermine the chances of the two sides reaching a trade deal this year.

As Britain negotiated its departure from the EU, it was forced to concede that it would continue to apply the bloc’s customs rules and regulations in Northern Ireland -- putting a border, in effect, in the Irish Sea. Now, EU officials worry that an emboldened Boris Johnson will push the issue to the brink and beyond -- just as the bloc’s negotiating leverage weakens.

As yet, the U.K. has provided little detail about how it plans to carry out those checks, but is expected to set out its intentions in coming weeks. The level of detail will be keenly watched in Brussels. The bloc’s frustration was laid bare last week, when the European Commission warned London that time is running out. It pressed Britain on the “urgent need” for a “detailed timetable.”

It wants to know, for example, if the U.K. will open additional customs posts for checks on animals and food coming through the port of Larne, close to Belfast. Without that, the commission said it sees a “significant risk of disruption of the trade flows entering Northern Ireland.”

The ramifications of this argument go far beyond the ports: Failure to implement the Northern Ireland deal could frustrate a wider trade deal between the U.K. and EU. Without that, Britain will default to trading with the bloc on terms set by the World Trade Organization -- meaning the return of quotas and tariffs at the end of the year. Johnson has threatened to walk away from the negotiations if no deal is in sight by June.

Speaking privately, EU officials raise several theories about the U.K.’s tardiness: The U.K. administration didn’t understand in detail what it was signing up for in the Brexit divorce deal. The British are attempting to sow confusion and division within EU ranks. Or the government in London is playing with words for domestic political consumption before caving into EU demands at the last moment.

Just as likely, though, is a repeat of the tactics they say Johnson has deployed since taking over from Theresa May. That would mean threatening a no-deal Brexit that would maim both sides in the hope of wringing concessions from the EU in the wider trade talks.

U.K. officials say they view last year’s strategy of threatening no-deal as a success. The EU, for example, agreed to give the Northern Irish assembly a say over how long the region’s special arrangements will remain in place. That raises the prospect of a time limit on the deal, something the bloc had always ruled out before agreeing to it.

Now, Britain may be looking to use the same playbook to win concessions from the EU in the wider negotiations over the trade deal. Those could include how closely the U.K. has to stick to EU regulations, the so-called level playing field.

The stage is therefore set for a confrontation, and the most likely forum will be the so-called joint implementation committee, the body responsible under the Withdrawal Agreement for settling the details.

For the EU, one official says, that means checking the U.K.’s homework in the shape of preparing for checks. But there are signs the U.K. sees it as something else -- a forum for more negotiation, with the accompanying potential for conflict, deadlock and crisis.

What’s causing some disquiet in Brussels is the recognition that the U.K. may have less to lose from walking away from the discussions than it did when negotiating its EU exit, officials with knowledge of the discussions said. Leaving the bloc without a deal would likely have triggered chaos, but failing to secure a trade deal, while painful, would be less of a shock for the U.K.

Europeans are aware that, with a large parliamentary majority behind him, Johnson could pull the plug on talks, destroying not only a potential trade deal but also the bloc’s leverage to ensure Britain sticks to its commitments on the Irish border.

The EU’s gamble is that the U.K. still sees a trade deal as the best result, officials said. That analysis is backed up by British officials -- but they warn that Johnson won’t make what he perceives to be further concessions on the Irish issue.