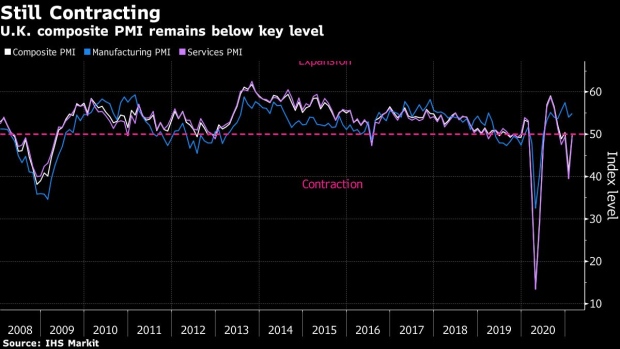 IHS Markit said more than half of all companies reporting lower exports in February blamed the decline on Britain’s departure from the European Union. That came as the rest of the economy showed signs of stabilizing after a rapid slump caused by the third national lockdown starting in January.

Markit said its composite Purchasing Managers Index rose to 49.8 in February, well above the 42.6 forecast by economists. It’s still below the critical 50 mark that signals expansion. A gauge of services activity climbed to 49.7, while manufacturing rose to 54.9.

“Confidence continued to be lifted by hopes that the vaccine roll-out will allow virus related restrictions to ease, outweighing concerns among many other firms of the potential further damaging impact of Brexit-related trading issues,” said Chris Williamson, chief business economist at IHS Markit.

The survey, which is a flash estimate based on about 85% of the usual total responses, is at odds with recent signs companies are adapting to new post-Brexit customs rules. The rejection rate for cargo shipped from France to the U.K. fell to the lowest since November in the past week, the logistics company Transporeon said on Feb. 15.