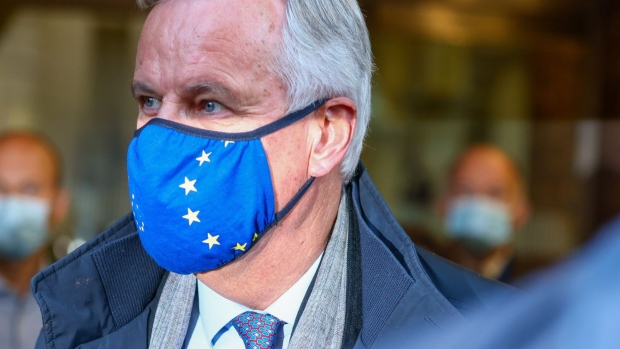 Michel Barnier, chief negotiator for the European Union (EU), arrives at St. Pancras International railway station in London, U.K., on Thursday, Oct. 22, 2020. The U.K. and the European Union will resume talks over a post-Brexit trade deal, less than a week after Boris Johnson suspended the discussions, amid growing signs an accord is in sight. Photographer: Simon Dawson/Bloomberg , Bloomberg

The latest trade talks between Britain and the European Union have been extended into the middle of this week, as the U.K. government indicated optimism about signing a deal.

EU Chief Negotiator Michel Barnier will remain in London for discussions through Oct. 28, according to a British government official, who asked not to be identified. Barnier had been due to leave on Sunday under the latest timetable for the negotiations.

The U.K. and the EU have moved into an intensive phase of talks in a bid to secure a free-trade agreement, after Britain temporarily walked away from the table earlier this month over complaints about a lack of urgency from the bloc and an unwillingness to compromise. The negotiators have agreed to work daily and over weekends, and on the basis of legal texts.

Northern Ireland Secretary Brandon Lewis said that Barnier staying on in London is “hopefully a very good sign,” but that the EU would also have to make concessions if an accord is to be reached.

“I think there’s a good chance we can get a deal,” Lewis said on the BBC’s Andrew Marr program on Sunday. “But the EU need to understand it’s for them to move as well.”