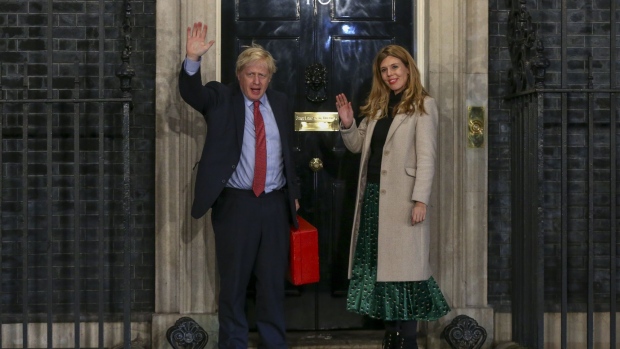 Johnson and his partner Carrie Symonds at Downing Street. Click here for Bloomberg’s most compelling political images from the past week. Photographer: Hollie Adams/Bloomberg , Bloomberg

Boris Johnson won a strong majority in the U.K. election, virtually guaranteeing the prime minister will see through his vow to take Britain out of the European Union. The wrangling over Donald Trump’s impeachment trial is shifting to the Republican camp, while an icon of U.S. business has had to learn the hard way how to navigate the president’s administration.From Russia, read about how a colonel in today’s version of the KGB amassed a fortune, and in Italy, a region long ruled by leftists may fall to Matteo Salvini, an anti-immigrant politician with eyes on the leading the government. We also bring you stories about a counter-espionage sting gone wrong and the growing problem of space junk.

We hope you enjoy these and more of our best stories in this edition of Weekend Reads.

Boris Johnson Gets Roars and Hugs While Opponent Faces DespairJohnson’s gamble on a snap election paid off in full, and he now wields a mandate to complete Brexit. Kitty Donaldson and Tim Ross give a fly-on-the-wall look from inside campaign headquarters on a night that cemented the U.K.’s trajectory, possibly for generations to come.

Impeachment Trial Puts McConnell-Trump Collaboration to the TestTrump’s showman instincts will be running up against Mitch McConnell’s cautious management of the Senate as they negotiate the terms of an election-year impeachment trial. Steven T. Dennis and Laura Litvan report.

GM Learns How to Navigate Minefield in Trump’s WashingtonCorporate management in the age of Trump is a learning experience, and perhaps no company has absorbed more painful lessons than General Motors. Ryan Beene, Mark Niquette and David Welch tell the story of its education by fire.

The Great Moscow Bank ShakedownKirill Cherkalin had cash and property worth more than $100 million in Russia, but he’s not an Kremlin insider or an oligarch. As Anna Baraulina, Evgenia Pismennaya and Irina Reznik write, he was recently a colonel in Russia’s Federal Security Service, a successor to the Soviet KGB.

Mistrust and the Hunt for Spies Among Chinese AmericansFor days after his FBI interrogation, Wei Su wondered: Where had the microphone been? Read this account from Peter Waldman and Andre Tartar about a botched investigation that underscores the U.S. government’s distrust of China and growing suspicion about Chinese Americans. If Matteo Salvini Can Win Here, He Can Win AnywhereBologna, where a suspected right-wing bomb attacked killed 85 people in 1980, has long been ruled by an allegiance of communists, socialists and the center-left. But that’s being tested by anti-migrant League party leader Matteo Salvini before next month’s regional ballot, John Follain and Chiara Albanese report. How Kim Jong Un Keeps Advancing His Nuclear ProgramTalks over eliminating North Korean leader Kim Jong Un’s nuclear arsenal have stalled. Jon Herskovitz explains that, in the meantime, Kim has been busy making his nuclear arsenal bigger, deadlier and better able to strike as far as the U.S. mainland.

Elephant Hunt 2.0: Botswana Is Trying Again After Global OutcryBotswana, which has outraged conservationists by lifting a ban on killing wildlife for sport, is making a second attempt to restart commercial hunts for its elephant population, the biggest in the world, Antony Sguazzin writes.

Pop quiz, readers (no cheating!). Which nation’s parliament approved legislation this week preventing undocumented Muslim migrants from neighboring countries from receiving citizenship? Send us your answers and tell us how we’re doing or what we’re missing at balancepower@bloomberg.net.

And finally … Since the Soviet Union launched Sputnik in 1957, Earth’s atmosphere has become home to thousands of spacecraft. Thomas Pfeiffer describes how the risks of collision are increasing fast as tens of thousands of new satellites ready for launch.

To contact the author of this story: Michael Winfrey in Prague at mwinfrey@bloomberg.net

To contact the editor responsible for this story: Kathleen Hunter at khunter9@bloomberg.net, Karl Maier