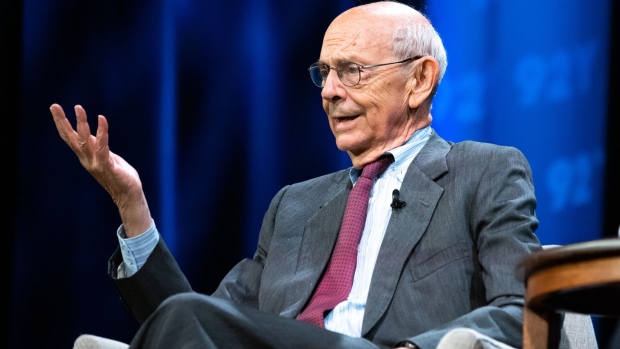 Stephen Breyer, associate justice of the U.S. Supreme Court, speaks during an interview on The David Rubenstein Show in New York, U.S., on Monday, Sept. 13, 2021. A sharply divided U.S. Supreme Court refused to block a Texas law outlawing most abortions after six weeks of pregnancy, letting a measure that went into effect Wednesday remain in force as the strictest restriction in the nation. , Bloomberg

(Bloomberg) -- Justice Stephen Breyer officially said he will retire at the end of the U.S. Supreme Court term, giving President Joe Biden a chance to put his stamp on the court and fulfill his pledge to name the first Black female justice.

Breyer told Biden in a letter Thursday he will retire in June or July assuming a successor has been confirmed.

“I have found the work challenging and meaningful,” Breyer wrote in a two-paragraph letter. “My relations with each of my colleagues have been warm and friendly. Throughout, I have been aware of the great honor of participating as a judge in the effort to maintain our Constitution and the rule of law.”

Biden will deliver remarks on Breyer’s retirement at 12:30 p.m. in the Roosevelt Room and the justice is expected to attend, according to the White House.

The vacancy presents both an opportunity and a political challenge for Biden, who will need to get his nominee confirmed by a Senate that Democrats control only because of Vice President Kamala Harris’ tie-breaking vote.

Breyer’s successor could serve for decades but isn’t likely to shift the ideological balance on a court that has a 6-3 conservative majority. The court’s oldest justice at 83, Breyer is a pragmatist and consensus-builder who typically sides with the liberal wing in divisive cases.

The Supreme Court is in the middle of what could be a transformational term. The court’s conservative majority is considering overturning the landmark Roe v. Wade abortion-rights ruling, establishing a constitutional right to carry a handgun in public and slashing the Environmental Protection Agency’s power to tackle climate change. In the term that starts in October, the court will consider abolishing race-conscious college admissions.

As long as they stick together, Senate Democrats can confirm Biden’s nominee without any Republican support. While moderate Democrats Joe Manchin of West Virginia and Kyrsten Sinema of Arizona have thwarted Biden on his economic agenda and voting rights, they have supported the president’s judicial picks.

Senate Majority Leader Chuck Schumer wants to move Biden’s nominee through the Senate on a timeline similar to what Republicans used to confirm Justice Amy Coney Barrett just before the 2020 election, according to a person familiar with his thinking. The Senate confirmed Barrett 30 days after former President Donald Trump picked her.

“We want to move quickly,” Schumer said Wednesday. “We want to get this done as soon as possible.”

Senate Minority Leader Mitch McConnell led a 2016 Republican blockade of Obama nominee Merrick Garland, but isn’t likely to be able to do that again given that Democrats now control the chamber and Republicans abolished the filibuster for Supreme Court nominees in 2017.

Liberal activists had been calling on Breyer, a 1994 appointee of President Bill Clinton, to retire while Democrats control the White House and Senate. Over the past five years, Republicans have used their political muscle to fill three Supreme Court seats -- and tip the court’s balance.