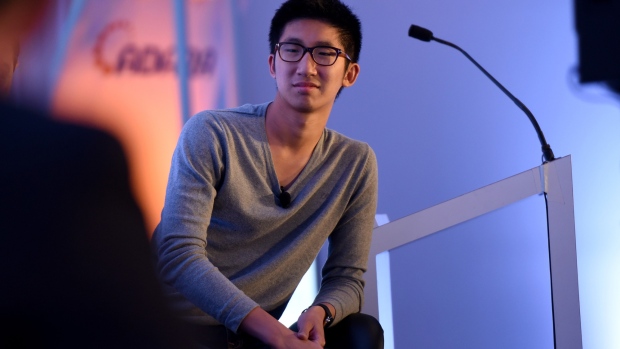 (Bloomberg) -- Brian Wong, co-founder of mobile advertising network Kiip Inc., has held a high profile in Silicon Valley since becoming one of the youngest people, at age 19, to receive venture capital funding for a startup. Now, he could become a cautionary tale.

Wong, now 27, was indicted by a grand jury Friday on felony charges of sexual assault. The indictment stems from events during an evening at the South by Southwest festival in Austin, Texas three years ago that Wong and his date remember very differently.

“Brian Wong is innocent of this three-year-old baseless accusation leveled against him,” Wong’s lawyer, Sam Bassett, said in a statement. Wong maintains that the two met on the app Tinder and had a first date that ended in consensual sexual activity, and that on the second date “she falsely complained of this activity being non-consensual.” “The evidence will show that Mr. Wong acted appropriately at all times,” Bassett said.

The situation marks the latest in a series of incidents that underscore the difficult environment for women in Silicon Valley. They include revelations this year over payouts to two executives at Alphabet’s Google who left in the wake of sexual misconduct allegations and a $10 million settlement last year of harassment and discrimination claims at Uber Technologies Inc., as well as troubling behavior by venture capitalists at several firms.

In Wong’s case, the charges stem from an encounter with a young woman Wong had invited to meet with him in Austin in March 2016. The woman, a student at Rice University, drove 160 miles from Houston to join Wong at a party at Perry’s Steakhouse, according to an affidavit for his arrest warrant filed in January of this year.

The woman, given the pseudonym Samantha Luu in the affidavit, told police she drank half a glass of wine and began to feel “disoriented, dizzy, and physically impaired.” She didn’t remember how she got to Wong’s hotel, but she described what happened next: Wong pushing her down to his bed and removing her clothes, as she, barely able to move, asked him to stop. Instead, he raped her, she alleged.

Eventually, she was able to kick him off, yelling “rape,” the document alleges. His response was, “How am I raping you?” She passed out and awoke to another attack a few hours afterward, according to her statement to police. Later, she was able to get up, get dressed, and drive back to Houston. Luu reported the assault on March 14, 2016, to Rice University Police, who transferred the case to the Austin Police Department.

The investigation was suspended because Luu chose not to continue with it. The case was reopened after Luu got back in touch with Austin police last year, “as she was now in a place where she felt she could participate,” according to the affidavit.

Wong doesn’t recall the evening that way. Bassett said that all contact had been consensual, and that since learning of the allegations, Wong had “fully cooperated” with law enforcement and had “passed a polygraph examination” regarding the events.

Kiip has asked Wong to take a leave of absence to focus on his legal defense, and appointed Chief Revenue Officer Bill Alena as acting chief executive officer. “Kiip is committed to maintaining a safe work environment in which every individual is treated with respect and dignity,” the company said in a February statement. “We expect every employee—including our CEO—to adhere to our codes of conduct.”

Wong achieved tech industry acclaim at a young age. He grew up in Vancouver, Canada, skipped four grades in school and enrolled in college at age 14. He graduated from the University of British Columbia at age 18 with a bachelor’s degree in 2009. He moved to Silicon Valley, got a job with Digg Inc., was laid off a few months later, and then hung out his own shingle.

After he founded Kiip (pronounced “keep”) in 2010, the mobile advertising network quickly caught the eye of venture capitalists, raising more than $30 million over the years from backers such as American Express Ventures and Verizon Ventures. Kiip’s last funding round in 2016 valued the company at $54 million, according to PitchBook data.

A charismatic regular on the conference circuit, Wong was scheduled to speak at South by Southwest this year, but his talk was cancelled abruptly. A festival spokesman declined to comment due to a policy of not discussing festival participants.

At the end of 2016, Penguin Random House published Wong’s book on leadership and entrepreneurship, called The Cheat Code. Its subtitle: “Going Off Script to Get More, Go Faster, and Shortcut Your Way to Success.”

To contact the editor responsible for this story: Anne VanderMey at avandermey@bloomberg.net, Peter BlumbergMark Milian