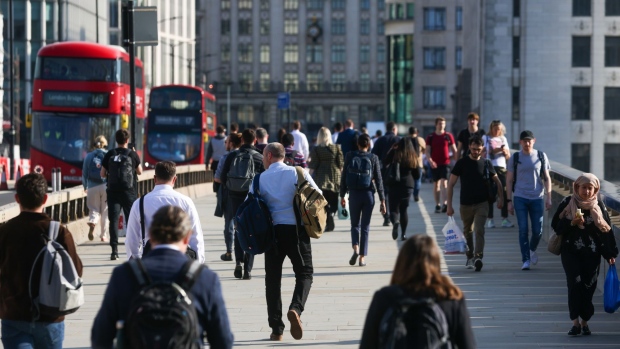 Commuters walk across London Bridge in London, U.K., on Monday, June 7, 2021. Flexible office firm IWG Plc warned that the prolonged impact from the pandemic was delaying its recovery and that 2021 earnings would be “well below” last year's. Photographer: Chris Ratcliffe/Bloomberg , Bloomberg

Bridgepoint’s initial public offering saw 166 individual investors in the British buyout firm make 380 million pounds ($518 million) from selling shares -- a spread that contrasts sharply with U.S. peers that have previously gone public. Employees and their families made up the bulk of those sellers, according to the pricing document and Bloomberg calculations.

Bridgepoint’s surge in debut trading on Wednesday morning means existing individual investors now hold stock worth 2 billion pounds. The shares were up 25% at 11:23 a.m. in London.

The investor breadth meant there were no overnight billionaires in the IPO, which raised 789 million pounds for the firm and its shareholders. The biggest known individual winner was Partner and Head of France and Southern Europe Frederic Pescatori, who sold around 16.5 million pounds of stock and still holds a 2.3% stake worth about 80 million pounds, the calculations show. Chairman William Jackson cashed out around 8 million pounds and keeps a 1.1% stake.

Few other individual investors were identified in the document as none held a level of shares that required disclosure. That indicates an old-fashioned partnership model at odds with the billionaire minting factories of U.S. listed private equity firms like Blackstone Group Inc. or Apollo Global Management Inc., where a handful of executives held significant stakes following their IPOs.

Bridgepoint is among several private equity companies that have been looking at going public. Antin Infrastructure Partners is considering a listing and TPG is weighing a potential IPO or merger with a special purpose acquisition company, people with knowledge of the matter have said. Closely held firms have been grappling with how to provide exits for founders and managers, while also ensuring rising stars can monetize their stakes.

The rare IPO by a buyout firm caps a remarkable journey since a management carve out from Royal Bank of Scotland Group in 2000. Jackson is one of Bridgepoint’s few remaining original executives, and it wasn’t clear from the disclosures whether the 166 individual investors included others from that founding period.