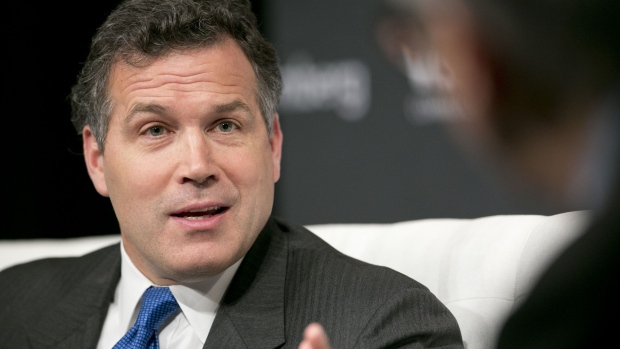 (Bloomberg) -- Former Bridgewater Associates Chief Executive Officer David McCormick joined a crowded Republican primary field for the U.S. Senate in Pennsylvania, saying he’s running to fight “socialist policies” that he said have led to a surge in inflation and threaten the American dream.

“I’m a self-made person,” McCormick said in making his announcement on Fox Business on Thursday. “I don’t owe anybody anything, and I would fight for the people of the Commonwealth of Pennsylvania to push back on these terrible policies.”

In a video posted on his website, McCormick portrayed himself as a fighter as a wrestler, soldier and business leader and said, “Now, I’m running for the U.S. Senate to fight the woke mob hijacking America’s future.”

McCormick, 56, who recently stepped down from the world’s largest hedge fund to pursue the Senate bid, filed paperwork with the U.S. Federal Election Commission on Wednesday to become a candidate in one of the key races for deciding which party controls the chamber.

The Republican race was shaken up in November when Sean Parnell, the candidate former President Donald Trump endorsed, suspended his campaign after a judge sided with his wife in a custody battle. Trump hasn’t said whether he’ll make another endorsement in the race.

Even before McCormick officially announced his candidacy, American Leadership Action, a Super PAC backing Oz, put up a web site and launched an ad calling McCormick “a friend of China” for his previous comments supporting the Asian nation and Bridgewater’s billion-dollar fund there.

McCormick said on Fox Business that Bridgewater has done business in China but that he’s well positioned to deal with China after negotiating with the Chinese throughout his business career.

“We need people that actually understand and can put forward a tough-minded set of policies with China,” he said. “That’s what I’ll do, and that’s what I’ll describe in my campaign.”

McCormick’s nascent campaign is already drawing support from some on Wall Street.

Blackstone chief executive officer Steve Schwarzman is backing McCormick’s bid, according to people familiar with the matter, who asked not to be named discussing information that isn’t public.

Bob Steel, a partner at Perella Weinberg Partners who worked with McCormick in the Bush administration, compared McCormick’s pedigree to that of Glenn Youngkin, the former Carlyle Group co-CEO, who beat Democrat Terry McAuliffe in Virginia’s November gubernatorial election.

“Youngkin’s campaign was less about career in finance, and more about his values, competence and ability to get things done,” Steel said. McCormick has “had these tightrope-walking jobs -- front lines of military, intense time at Washington, and managing a big alternative investment firm, and he’s always cool under pressure.”