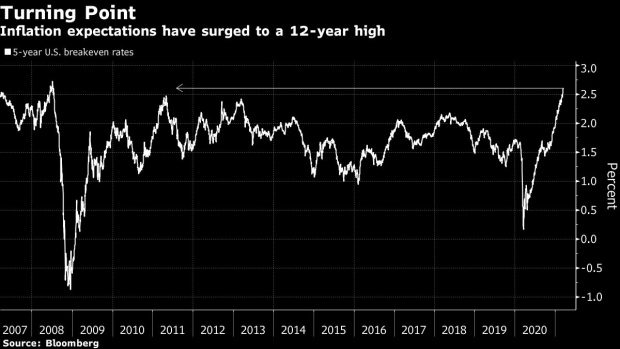 (Bloomberg) -- The world is on the verge of a new inflationary wave that could force the Federal Reserve to raise rates earlier than planned, according to the co-chief investment officer of the world’s largest hedge fund.

“The pricing-in of inflation in markets is actually the beginning of a major secular change, not an overreaction to what’s going on,” Jensen said. “Economic conditions and inflation will adjust faster than either markets or the Fed are expecting.”

While market-derived inflation expectations have surged near a 12-year high, the Fed has signaled patience with a heating economy and projected no rate hike for the coming two years. It’s a stance policy makers are expected to reiterate at the end of their meeting Wednesday.

Between the upcoming $1.9 trillion stimulus program and the ending of lockdowns, traders are betting the economic revival will force the Fed’s hand sooner. Eurodollar contracts suggest a roughly 75% chance of tighter policy by December 2022.

Labor-friendly policies and slowing globalization mean technological progress is the only disinflationary force around, according to Jensen. Meanwhile, fiscal and monetary policy makers are likely to offer yet-more support until breaking point.

Bridgewater aims to win big from this macro turnaround, using alternative data to map the rollout of the fiscal stimulus, which Jensen says is by nature harder to track than monetary tools. The Pure Alpha fund’s record loss last year was in part down to the fact the firm was caught off-guard by the speed of both the global lockdowns and subsequent policy support.