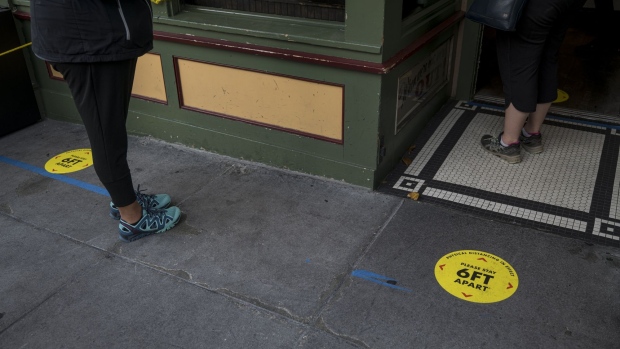 Social distance markers are displayed on the ground in front of a restaurant in San Francisco on June 15. Photographer: David Paul Morris/Bloomberg , Bloomberg

(Bloomberg) -- Bob Prince, co-chief investment officer of the world’s biggest hedge fund at Bridgewater Associates, said the impact of the coronavirus pandemic could last 18 to 24 months, complicating monetary and fiscal policy efforts to bolster the economy.

“There’s a huge amount of uncertainty,” Prince, who helps manage the firm’s investment process alongside co-CIOs Ray Dalio and Greg Jensen, said Wednesday in an interview during the Bloomberg Invest Global virtual event.

Bridgewater’s hedge fund has suffered losses this year amid the market chaos surrounding the coronavirus pandemic. The firm’s flagship Pure Alpha II fund fell 20% in 2020 through May. Bridgewater got hit by the crisis at “the worst possible moment,” when its portfolios were positioned to profit from rising markets, Dalio wrote in mid-March. The Westport, Connecticut-based firm saw a 15% drop in assets during March and April, declining to $138 billion.

Bridgewater wasn’t alone in getting caught on the wrong side of a sell-off that began in late February. Several prominent names have stumbled as the spread of the pandemic halted the economy and put an end to Wall Street’s longest-ever bull run. But U.S. stocks have since defied initial gloomy expectations, rallying 37% since the March low, with stimulus from the Federal Reserve and the easing of lockdowns fueling hopes for a fast recovery.

Prince has previously said that the fund is exploring ways to capitalize on the resilience of basic goods and services as companies that sell household staples such as fruits and vegetables have seen cash flows steadily climb during the quarantine. He’s also said that there could be a “duration mismatch” between how long and deeply the pandemic hits in relation to how long fiscal and monetary spending can continue, and warned that fiscal policy is replacing missing income but not necessarily lost spending.