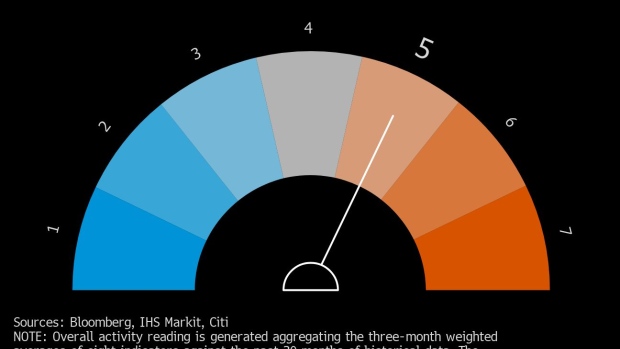 A health care worker administers a dose of the Covid-19 Covishield vaccine at a vaccination camp set up at Sewa Kendra Aaganbadi School in the Sanjay Camp area of New Delhi, India, on Sunday, Sept. 19, 2021. India, with the second largest Covid outbreak with over 33 million infections, has administered some 758 million vaccine doses, but even with that large number only a little over 13% of the country's population is fully vaccinated, according to the Bloomberg Vaccine Tracker. Photographer: T. Narayan/Bloomberg , Bloomberg

Two of the eight high-frequency indicators tracked by Bloomberg News gained speed last month, while five held steady and one slowed. The needle on a dial measuring so-called animal spirits, however, remained unchanged from the July level, as the gauge uses three-month weighted average to smooth out volatility in single-month readings.

The monthly expansion in services and manufacturing activity coincided with relatively low new Covid-19 cases and a pick up in the pace of vaccinations -- more than 834 million doses have been administered so far in the nation of 1.3 billion people. That said, less than a fifth of the population is fully vaccinated and risks of a third wave of infections persist.

Here are the details of the dashboard for August:

Exports rose at a steady pace of about 46% year-on-year in August, although the high growth has been mainly due to the effect of a contraction in the year-earlier period. Data from other export powerhouses showed a varying trend, with South Korea reporting faster export growth and Vietnam seeing a sharp decline due to disruptions caused by Covid outbreaks.

Industrial production expanded 11.5% in July from a year earlier -- a relatively slower pace compared with the first three months of the fiscal year that began in April, and attributable to the wearing off of a favorable base effect.

Similarly, output at infrastructure industries, which makes up 40% of the industrial production index, expanded 9.4% in July, with demand for coal, natural gas and cement driving activity. Both data are published with a one-month lag.