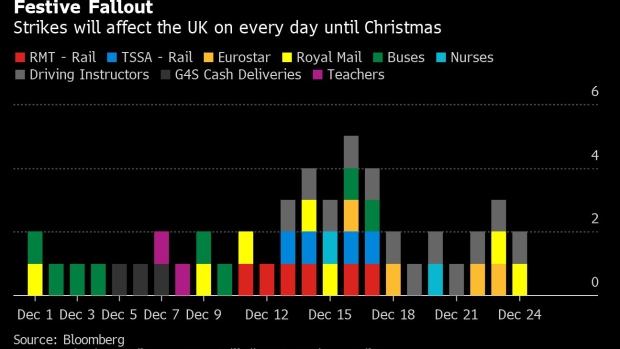 (Bloomberg) -- The UK will be affected by strikes every day this month in the run up to Christmas, with trade union leaders increasing threats to coordinate industrial action and cause maximum disruption in their quest for higher wages.

Workers from the country’s rail network, buses, postal service, health sector and schools are among those staging walkouts amid high inflation and government plans to rein in public spending.

The day with the least expected disruption is Dec. 4, this Sunday, with only a walkout on some bus services expected to spill into the morning. Otherwise, full strikes are currently scheduled on every date until Dec. 24.

Read More: Union Warns of Cash Shortage Over Christmas Due to Strike

“We will be talking to the other unions,” he told Sky News. “We will be making sure that emergencies are covered, but ultimately, the government needs to listen.”

GMB said Wednesday that more than 10,000 ambulance workers had voted to strike across much of England and Wales. Another labor group, Unison, has said its ambulance workers are likely to strike before Christmas. Nurses are also striking, while more widespread industrial action could still be announced across the NHS.

Transport minister Huw Merriman is due to meet Mick Lynch, head of the RMT, Friday. The UK is braced for a month of transport chaos, with several unions scheduling walkouts designed to bring the train system to a halt.

“We are concerned about the impact that strikes by multiple unions will have on the people of this country as we enter into this Christmas period,” Prime Minister Rishi Sunak‘s spokesman, Max Blain, told reporters on Thursday. “We want these unions to think about how this will affect people.”

Christmas deliveries are also at risk from widespread protests by Royal Mail staff.

A general strike -- where workers across a number of industries stop work simultaneously -- is “not on the agenda at the moment,” Prendergast said. But “we need to see something happen very fast,” he added.

--With assistance from Alex Morales.

(Updates with political reaction in seventh and eighth paragraphs.)