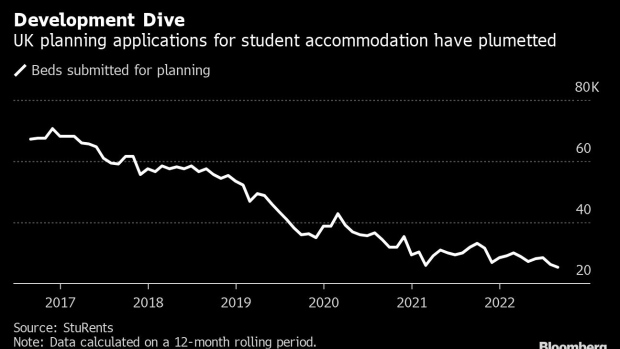 (Bloomberg) -- The UK is running out of new beds for its ever-growing student population as builders cut back on construction to defend against spiraling inflation.

Britain is set for a shortfall of about 29,000 purpose-built student beds in 2023, according to data compiled by StuRents, the country’s biggest student property portal. The figures, based on core demand for purpose-built university housing from international students and first-year students living away from home, shows the gap between demand and supply is growing.

“Initially it was Covid-19 that put the brakes on construction but now it is inflation,” said Richard Ward, head of research at StuRents. “Combined with significant hikes in interest rates, many developers are putting plans to buy sites for student housing on ice.”

The crunch in supply saw the number of student beds submitted for planning dive by a third ahead of the current academic year, falling from almost 38,000 beds in the 12 months through September 2019 to just over 25,000 in the same period this year, StuRents data shows. This drop in development came as Britain’s student population continued to rise, with the amount of full-time students increasing to 2.75 million in the 2020-2021 academic year from 2.5 million the previous year, according to HESA data.

“University demand has historically proven countercyclical, and risen during more challenged periods economically and in the jobs market,” said James Seppala, head of European real estate at Blackstone Inc, which bought the iQ Student Accommodation business for £4.66 billion ($5.7 billion) in 2020. “We have an additional pipeline of another 3,000 beds we are working to make available to students over the next several years.”

Students who fail to secure a purpose-built student bed usually turn to the private rental market, which tends to require tenants to pay their own non-rental costs directly to service providers. That makes them more vulnerable to hikes in utility bills and tax, which are typically included in a single bundled price for those living in purpose-built accommodation.

Still, there’s no guarantee there will be room. In 2021, the University of York was forced to allocate students to accommodation in Hull, a city more than 30 miles east which takes over an hour to travel to on the train. The university said that “unprecedented demand” for university spots and “a reduction in the availability of privately let accommodation in York” meant there was a shortage of rooms for students.

Since then, red hot inflation has caused building costs to surge, dampening the financial viability of new proposals. More than 260,000 buy-to-let mortgages have been redeemed over the last five years as private landlords look to exit the sector, according to a Knight Frank report published this month.

The UK housing downturn is denting construction activity as a whole, with November orders drying up amid mounting concerns about the outlook for Britain’s economy. S&P Global said purchasing managers in the construction industry were the most pessimistic since the start of the pandemic in May 2020.

“Optimism fell to the same level as December 2008 during the last recession,” John Glen, chief economist at the Chartered Institute of Procurement & Supply, said in a report released Tuesday. “Construction companies now have a tightrope to walk in terms of being ready for recovery and cautious around investment until the road is clear for sustainable building opportunities ahead.”