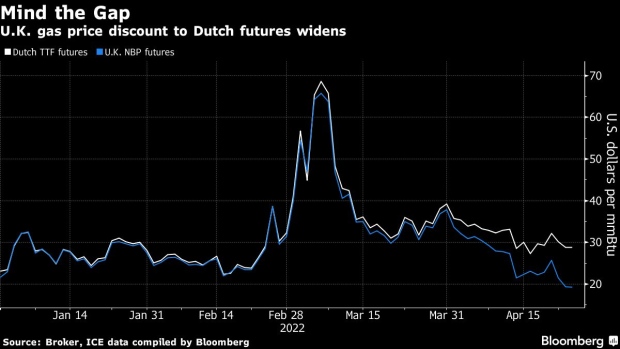 (Bloomberg) -- Britain is awash with natural gas imports, but with the heating season at an end and a lack of storage facilities, it has few outlets for the fuel.

Northwest Europe is set to receive a record level of liquefied natural gas imports this quarter, with the bulk arriving at the U.K.’s three terminals. Britain generally exports excess gas to the continent during the summer, yet pipelines connecting to the European Union can only handle so much.

The discount of front-month natural futures in the U.K. to the Dutch contract -- the European benchmark -- is now the widest since at least 2011, data compiled by Bloomberg show.

“The discount is largely because of the high volume of LNG and limits on the ability to export that excess to the continent,” said Trevor Sikorski, head of natural gas and carbon research at Energy Aspects Ltd.

For months, gas prices have been elevated across the U.K. and continental Europe due to low gas inventories. The energy crunch was exacerbated in February when Russia -- Europe’s largest gas provider -- invaded Ukraine, creating a risk of supply disruptions and sending prices to record levels.

The U.K. has no direct dependency on Russian gas imports. The nation also receives gas from domestic offshore fields and via pipelines from Norway and the EU, making it less susceptible to potential disruptions than other nations in the region.

As a result of the higher prices, LNG shipments have shifted away from Asia, going instead to Europe. The list of suppliers is diverse, from the U.S. and Qatar to Algeria and Peru.

But Britain lags mainland Europe when it comes to stockpile facilities for fuel arrivals ahead of next winter. Its biggest storage site closed in 2017. Meanwhile, LNG shipments keep arriving in the U.K., which has a better ability than most EU nations to dock tankers and turn the liquefied fuel back into gas.

When facilities on the continent fill up, the LNG must go to markets like the U.K. and Spain, which have the most excess re-gasification capacity, according to Sikorski. “As it does so and hits exports limits, the prices go to a discount,” he said.