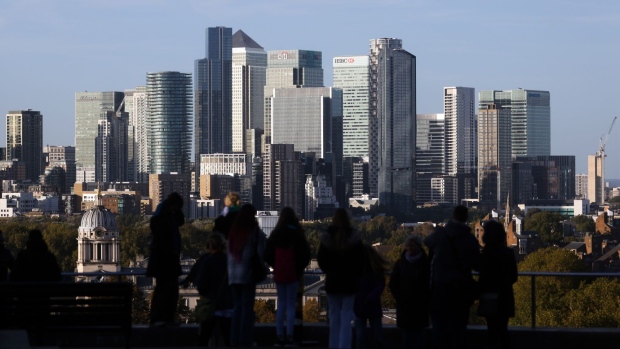 Skyscrapers in the Canary Wharf business, shopping and financial district in London, U.K., on Thursday, Oct. 21, 2021. U.K. Prime Minister Boris Johnson said the City of London will prosper outside the European Union, noting job losses and disruption to capital flows have been lower than feared. Photographer: Chris Ratcliffe/Bloomberg , Bloomberg

The British government’s £220 billion blueprint for juicing a stagnant economy includes creating “investment zones” around the nation where companies can take advantage of sweeping tax breaks and pared-down planning regulations.

While releasing details of his mini-budget Friday, Chancellor of the Exchequer Kwasi Kwarteng said the designated areas will be granted “an unprecedented set of tax incentives for business to invest, to build and to create jobs right across the country.” The government has identified 24 potential sites, including airports, docks, a gigafactory and an area of Stoke-on-Trent dedicated to the ceramics industry.

The playbook is familiar. London’s Canary Wharf, home to some of the world’s biggest banks, has its origins in a budget delivered under Margaret Thatcher. The transformation of the Isle of Dogs into a financial district pierced by skyscrapers became the most iconic development under the enterprise zones of the 1980s, and that inspired the coalition government of David Cameron and George Osborne to reintroduce the concept in 2011.

“The investment zones could be areas where the government tests certain policies to get the data,” said Kay Swinburne, vice chair of financial services at KPMG UK. “If they work, they could be rolled out nationally.”

Investment zones will offer widespread tax relief over 10 years, including a full exemption from business rates -- an unpopular levy on properties -- and stamp duty land tax, as well as tax-cutting allowances on money that companies spend on machinery and building construction. Employers also won’t have to pay National Insurance contributions on the salaries of new workers earning as much as £50,270 ($54,600) annually.

Business groups broadly welcomed the strategy, with the Federation of Small Businesses called it a welcome innovation.

“If it’s well-targeted, it is potentially a useful contribution to levelling up,” said Kitty Ussher, a former Labour MP and Treasury minister who is now chief economist for the Institute of Directors.

The prospects of investment zones sprouting up across the country and benefiting from relaxed planning regulations has angered environmental groups and the National Trust, which manages heritage sites and natural habitats across the UK and calls itself Europe’s biggest conservation charity.

“The new Investment Zones represent a free-for-all for nature and heritage, yet we know that green spaces and beauty are vital to attract investment and for a good quality of life,” Hilary McGrady, director general, said on the National Trust’s website after the plans were announced.

The group will tap its membership to “respond in full” to any government plans it sees as weakening environmental protection, she said.

The Royal Society for the Protection of Birds also pledged to mobilize its more than 1 million members to oppose the plan. “Make no mistake, we are angry,” the RSPB said Friday on its Twittter feed. “This Government has today launched an attack on nature. We don’t use the words that follow lightly. We are entering uncharted territory.”

Markets also were not  impressed, with sterling and gilts tanking in the hours following Kwarteng’s announcement of the sweeping “mini budget” amid fears that deep tax cuts will stoke inflation and leave Britain with a gaping deficit at a time of intense economic hardship.

Critics also accuse low-tax zones of simply displacing business activity and jobs from other areas, and point out that free ports already exist within the European Union.

For supporters of Truss, however, Brexit allows the UK to pursue incentives that wouldn’t be allowed by Brussels.

“They’ve taken the free port model and supercharged it,” said Ben Houchen, mayor of Tees Valley in the northeast of England. Tees Valley is one of 38 local authorities in discussions with the government about establishing investment zones.