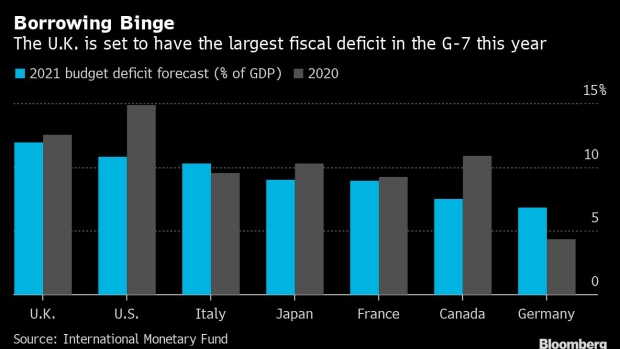 After 19 months spent attempting to ward off Covid-19 while safeguarding jobs and businesses, the U.K. is heading into winter with a growing problem: The coronavirus is spreading rapidly, just as the economy starts going in the opposite direction.

U.K. cases are accelerating faster than in other western European nations, while deaths have jumped to their highest since March. Government ministers are having to deny they are planning for a new lockdown. At the same time, economic growth is slowing, inflation is running high, the Bank of England is expected to hike rates soon and households are facing a cost-of-living crisis.

It’s a contrast to successive waves of infection earlier in the pandemic, when tighter Covid curbs hurt the economy and looser measures helped it rebound. But most restrictions were removed in July, and key fiscal and monetary support programs -- including the furlough scheme and a boost to Universal Credit -- have now also been wound down. That leaves the U.K. heading into winter relying almost entirely on its vaccination program to ward off the virus and protect the economy.

Still, the breakdown of the link between looser restrictions and higher growth is concerning economists, who view public health action as the best way to keep an economy on track.

“Lingering uncertainty will hit confidence -- both for consumers and businesses. So while economic momentum is already slowing, the rise in cases could continue to push back on big ticket purchases,” said Sanjay Raja, U.K. economist at Deustche Bank in London.

Combined with a growing global supply chain crisis, a shortage of truck drivers -- exacerbated  by Brexit -- and an energy-price crunch, households are coming under sustained pressure.

Why Brexit Britain Is Isolated, Vulnerable and Running on Fumes

The Resolution Foundation said this week that the inflation spike alone is set to reduce household incomes by 1,000 pounds ($1,380) in 2022. Credit Suisse is forecasting the biggest drop in U.K. disposable income since 2011.

Against this backdrop, Chancellor of the Exchequer Rishi Sunak is preparing to deliver a budget widely expected to take the U.K. -- which has the biggest budget deficit in the G-7 -- further down the road toward fiscal normalization. While he plans to extend a program of state-backed loans for U.K. businesses, he is also hiking taxes to help fund the NHS, calling the concept of extra borrowing “immoral.”

While last winter saw the government ramp up social restrictions and financial support, officials are currently signaling a different approach this year. Prime Minister Boris Johnson’s government is particularly keen to avoid a repeat of last Christmas, when families were forced apart.

If Covid hospitalizations and deaths continue rising that stance may yet prove untenable. Yet ministers say now is not the time to enact “Plan B”, which could introduce compulsory face masks, use of vaccine passports and advice to work from home.

But pressures are building on Johnson to act sooner rather than later. Martin McKee, a professor of European public health at the London School of Hygiene & Tropical Medicine, characterized the U.K. approach to fighting Covid as “vaccine just,” recommending instead a “vaccine plus” strategy adding more mask-wearing, better ventilation and mandated inoculation.

“I’m very surprised by this very sort of wishful thinking approach to Covid that has been seen for a while,” said Matteo Cominetta, senior economist at Barings Investment Institute.

If the BOE hikes rates as quickly as markets expect, and Sunak cuts fiscal support, “it would be like the mother of all tightenings” for an economy that is “still reeling from all these structural shocks,” said Cominetta.