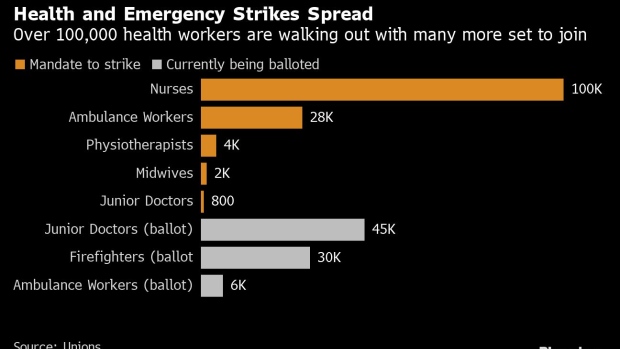 (Bloomberg) -- The UK’s beleaguered National Health Service faces its latest industrial action Thursday as physiotherapists walk out in a dispute over pay.

The Chartered Society of Physiotherapy said as many as 4,200 members would strike, following in the footsteps of nurses and ambulance workers who began walkouts last month and are continuing to protest against below-inflation pay rises from the government.

The NHS is suffering from long waiting lists that built up during the Covid-19 pandemic and the seasonal impact of patients suffering from flu. Unions accuse Conservative ministers of creating a staffing crisis with years of real-terms pay cuts, while the government points to funding increases and insists that generous raises would risk embedding inflation.

Health service workers were given an average raise last year of less than half the UK’s rate of inflation, which still stands above 10%.

“We are determined to secure a pay deal that helps our members cope with the cost of living crisis and helps the NHS recruit and retain staff,” said Claire Sullivan, director of employment relations at the CSP.