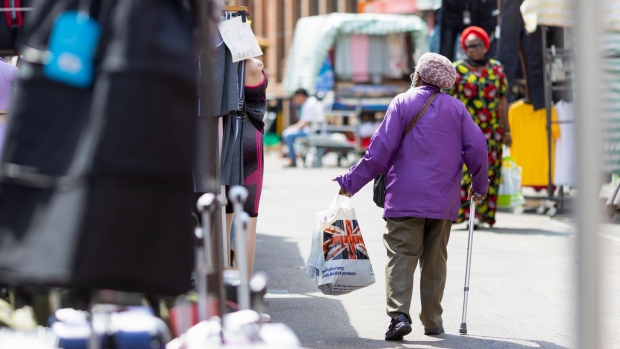 UK consumer prices surged 9% in the year through April. , Bloomberg

(Bloomberg) -- UK inflation rose to its highest level since Margaret Thatcher was prime minister more than 40 years ago, adding to pressure for action from the government and central bank.

Consumer prices surged 9% in the year through April, the fastest rate since 1982, the Office for National Statistics said Wednesday in a report that marked a bleak moment for living standards.

The increase is more than double the pace of basic wage growth, squeezing consumer spending power at the sharpest pace on record. The pain is set to intensify, with the Bank of England predicting double-digit inflation by October when energy bills are almost certain to jump again.

The cost-of-living crisis already has amplified the political debate about how to handle a series of shocks hitting the UK. Prime Minister Boris Johnson’s Conservatives government has targeted relief at those with jobs, while the Labour opposition is calling for an emergency budget to help pensioners and people on benefits.

Both parties and some economists have faulted BOE Governor Andrew Bailey for describing inflation as “temporary” for too long. One of Bailey’s predecessors, Mervyn King, who led the central bank through the crisis in 2008, said last year’s dose of stimulus was a mistake.

“The mistake is that central banks around the world are very confident that inflation will simply fall right back to the target,” King  said in an interview on LBC last night. “Most people are going to be worse off because of the higher food and energy prices.”

The jump in inflation highlights the difficult balancing act facing the UK central bank, which is raising interest rates to rein in inflation at a time when the risk of recession is mounting. With the government raising taxes, it also piles pressure on Chancellor of the Exchequer Rishi Sunak bring forward measures to help more people.

Fuel and energy prices drove much of the increase.