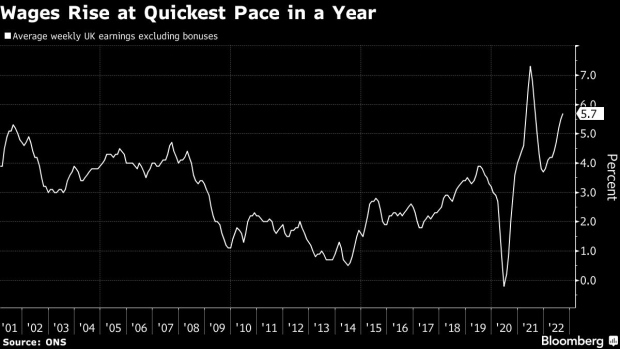 (Bloomberg) -- Britain’s property appraisers expect a shallow and potentially short downturn in the housing market because many people are likely to keep their jobs during the recession.

The outlook from the Royal Institution of Chartered Surveyors follows three months of declines in house prices recorded by two of the nation’s biggest mortgage lenders.

While buyers are growing more cautious after a jump in interest rates, the labor market remains tight and workers in short supply. That, according to RICS, probably will prevent a 1990s-style plunge for residential property.

“The likely ‘job-rich’ recession suggests the downturn in the housing market this time could be shallower compared with past experiences,” Simon Rubinsohn, chief economist at RICS, said in a report Thursday.

Overall activity weakened in November. New buyer inquiries remained in negative territory, measuring minus 38% on RICS’s measure in November, up from a reading of minus 55% the month before. Estate agents across the country universally reported a decline in sales prices for the second month. The biggest drops were in the south east and south west of England, which performed well after the pandemic.

The concern is that latest readings are the start of a more protracted downturn that could rival the property market recession that started in late 1989. That episode saw homes lose a fifth of their value over three years, leaving as many as a million people living in places worth less than the mortgages used to buy them.

Nationwide Building Society’s Chief Financial Officer Chris Rhodes last month said his “worst-case” scenario included a 30% drop in prices, but that a 8% to 10% decline is more likely. Bloomberg Economics expects a drop of slightly less than 10% next year, estimating that values are currently 20% higher than can be justified by fundamentals.

RICS agents also expect a decline. An index measuring price expectations for the next year fell to minus 61% last month from minus 48% in October.

The big driver is surging interest rates, which have driven up the cost of mortgages to the highest since the property market was last in recession in 2008 and 2009. The Bank of England lifted its benchmark lending rate eight times in the past year from near zero to 3%, and investors anticipate more moves in the months ahead.

That’s pushed mortgage rates on two-year fixed-rate deals above 6% in the past few months, meaning anyone who remortgages now may see their payments double, according to data from Moneyfacts Group Plc. The Office for Budget Responsibility anticipates the average mortgage cost may remain elevated until the end of the decade.

The surprise so far has been how long property prices held up. Nationwide recorded double-digit growth from a year ago through August. A series of tax breaks, cheap money and the ambition of consumers to move out of city centers and into places with space for a home office kept prices soaring through the pandemic.

Britain’s strong labor market is part of what’s kept the property market afloat. At least 600,000 workers dropped out of the labor market since the pandemic, leaving companies scrambling to hire staff. That’s pushing up wages.

The other factor bolstering the property market is a shortage of houses up for sale. RICS said housing supply ticked up marginally in November, with an average of 35 properties on estate agents books, up from 34 in October.

Builders are also starting fewer new homes than they did in previous decades even though the population is expanding.

The housing rental market remains even tighter. The net balance of estate agents reporting a decline in landlord instructions hitting minus 27%, even as tenant demand continues to swell. RICS says this imbalance is likely to push up rents further.

“This is a distorted market, and such levels are not sustainable,” said Alison Whitfield at Whitton & Laing in Exeter, England. “Tenants are not only unable to afford the higher rents but are no longer prepared to pay higher rents.”