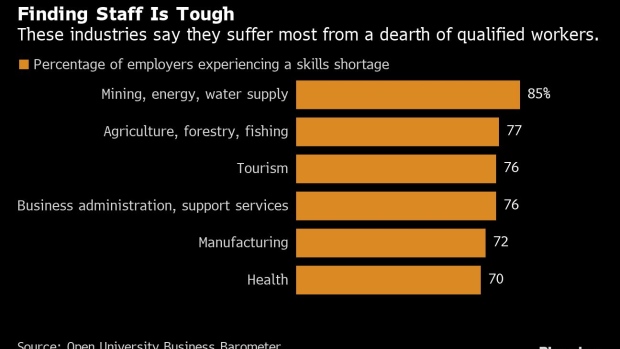 (Bloomberg) -- The people of Hastings on England’s south coast know a thing or two about staging a battle.

The decisive defeat to Norman invaders in 1066 is one of the most notorious events in British history. More recently, the seaside town has seen conflict as the country tears itself apart over membership of the European Union. The last election two years ago was such a close contest in Hastings that it went to a recount and almost cost a top government minister her job.

With another vote coming on Dec. 12, the town is again witnessing a key political fight, and it’s one that encapsulates more than just the struggle over Brexit. The underlying economic malaise in Hastings and similar places helps explain how Britain has ended up at what’s likely to be a watershed moment.

Statistics show that a greater proportion of people in Hastings is likely to have no formal education than most other places in Britain. A fifth of the working-age population has no qualifications whatsoever. The University of Brighton shut its Hastings campus at the end of September due to a lack of students.

The town also has one of the highest percentages of rough sleepers. Locals are often stuck in joblessness for generations, yet employers ranging from high-tech manufacturers to basic health care providers struggle to recruit.

The disparities over skills and opportunity as well as income, meanwhile, are being amplified by an election campaign where rival parties are promising to tackle inequality by educating more or relying less on foreign workers.

“Aspiration is definitely one of the things that matters in this election,” said Sonia Blizzard, founder and managing director of Beaming, an internet-services provider based near the town that employs about 20 people. “People need to feel that they can access jobs and the economy in the way that other parts of the U.K. can.”

The lack of skills is both a threat to business and a key part of the election. For years, migrant labor, particularly from the EU’s poorer eastern members, has plugged the gap. But such workers have been increasingly leaving or not even arriving ahead of Brexit, which is currently scheduled for Jan. 31 after numerous delays.

Average salaries in IT have already risen by about 10,000 pounds over the last two years as a result, according to recruitment firm Broadbean. Educators, meanwhile, bemoan a lack of funding that leaves many locked out of progress.

In the U.K., it takes five generations for the descendants of a low-income family to reach the average income compared with two or three in Scandinavia, according to the Organisation for Economic Cooperation and Development. Fears over automation—companies opting for robots rather than people should labor costs rise after Brexit—also loom.

“If people don’t feel they can participate and benefit from the economy of the future, they will vote for policies that thwart modernization of the economy,” Minouche Shafik, head of the London School of Economics and a former Bank of England policy maker, said in an interview on Bloomberg Television. “Much of the politics of today, the sort of nostalgia politics we see, is a reflection of individuals feeling like ‘I haven’t got a chance in that future, so I’m going to do everything I can to thwart it.”’

In Hastings, about 70 miles from London and still counted as part of the U.K.’s wealthiest region, the contrast between those with access to opportunities and those without is glaring. It’s one of a dozen “social mobility and opportunity areas” in a government program aimed at boosting skills.

Pockets of deprivation are made even more conspicuous by those known locally as the “Down From Londons,” incomers who are more affluent and move to Hastings for its cheaper housing, burgeoning arts scene and seaside lifestyle. Moreover, they are more likely to want to remain in the EU and keep the country open to immigration.

Support for Brexit in the 2016 referendum was 75% among those with no qualifications, according to the Joseph Rowntree Foundation. Overall, 55% of Hastings residents voted to leave, just above the 52% nationwide.

An antique shop on the seafront has a “stop Brexit” sticker in its window display, littered with vases, marble busts and vintage jewellery. A café nearby serves Mexican-style hot chocolate and sourdough sandwiches. Meanwhile, one job agency in the town center advertises for seasonal turkey pluckers, part-time cleaners and forklift operators.

“There’s been an element of gentrification, but is there any real impact on the hardest-to-reach, most deprived neighbourhoods? I would say no,” said Nick Perry, who is running as the anti-Brexit Liberal Democrat candidate. “In fact, things are getting worse. There is wealth and extreme poverty quite close to each other.”

A recent YouGov poll estimated that Prime Minister Boris Johnson’s Conservatives will win in Hastings and Rye again, though not by very much. In the 2017 vote, former Home Secretary Amber Rudd won the seat by just 346 ballots. Rudd, who wants to keep a close relationship with the EU, was barred from running for a seat as a Conservative after the party blamed her for disrupting Brexit.

The new candidate for the area, Sally-Ann Hart, did not respond to repeated requests for comment. She lists bringing more skilled and higher-paying jobs to the area as some of the most pressing local challenges on her website. Nationally, Johnson is pledging new funding for specialist institutes as he tries to come out of the shadow of almost a decade of spending cuts under his Conservative predecessors.

Given the wafer thin majority and economic backdrop, Hastings is a target of the opposition Labour Party and candidate Peter Chowney has made whittling the skills shortage a key part of his election pledges.

Leader Jeremy Corbyn, an avowed socialist who is promising to tax the rich to pay for higher government spending, held a rally on Dec. 2 in Hastings. He addressed inequality, homelessness, and his party's proposed “National Education Service,” offering free education throughout people’s lives.

For Dan Shelley, an executive director at the East Sussex College Group—which has a campus in Hastings—the pledges are welcome. Because of cuts to education, the college is only able to offer 16-hour weeks of teaching for its full-time courses as opposed to the 30 hours he would like.

“There’s been a bit of an arms race going on about spending on education, particularly for further education, which is music to my ears,” said Shelley. “But it’s a bit like, where have you been for the last 20 years? Because it’s just been cut after cut after cut.”

--With assistance from Francine Lacqua and David Goodman.

To contact the editor responsible for this story: Rodney Jefferson at r.jefferson@bloomberg.net