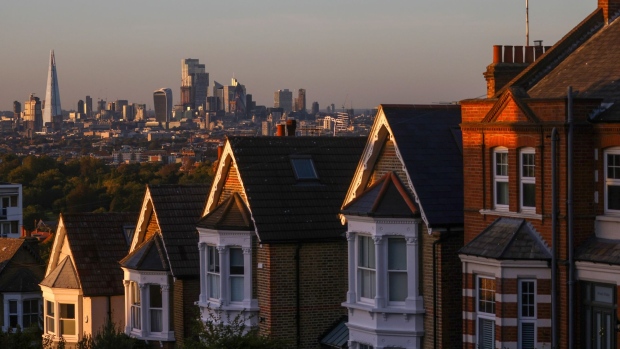 Thousands of British homeowners face a squeeze on their finances after the government’s u-turn on its mini-budget failed to arrest a sharp rise in mortgage borrowing costs.

The average two-year fixed-rate on a home loan climbed to 5.97% on Tuesday, according to Moneyfacts Group Plc. That’s up more than 1.5 percentage points since Kwasi Kwarteng roiled markets with a program of tax cuts on Sept. 23.

The Chancellor of the Exchequer’s statement sent the yield on two-year interest-rate swaps, which lenders typically use to price mortgage products, soaring to the highest level since the financial crisis. Lenders responded by pulling more than 40% of all mortgage products, leaving borrowers rushing to secure deals before rates increased. For homeowners looking to refinance, the jump means they may not be able to afford to re-mortgage and could -- at worst -- have to sell.

“An increase in mortgage rates to 6% would take repayment affordability above the level immediately prior to the 2007 downturn and just below the peak level in 1990,” housing analyst Neal Hudson wrote in a circular on Friday. “With the rapid rise in mortgage rates, worsening outlook for the economy, cost of living crisis, and, potentially, large cuts in public spending, the possible drivers of forced sales are all present.”

Higher borrowing costs for lenders mean the average monthly cost of a two-year fixed-rate mortgage will rise to about £1,325 per month, from £725 in 2021, Bloomberg Economics estimated last week. House prices may fall by a double-digit percentage, as mortgage payments rise to about 35% of average household disposable income, economists led by Niraj Shah wrote.

A 20% decline in house prices would put about 5% of UK mortgage holders in negative equity, Hudson estimated. Sluggish growth in London in recent years would see homeowners there hit harder if such a fall were to happen, with 10% left in a situation where their home is worth less than their mortgages.

“Given the ongoing inflationary pressure, household finances will be squeezed from all sides, making it tougher for them to meet all their obligations,” Bloomberg Intelligence analyst Iwona Hovenko said. “I’d expect such households to try to make cuts in their discretionary spending before being forced to sell.”

The average five-year fixed-rate on a mortgage is now 5.75%, the Moneyfacts data show, a one percentage point increase since the mini-budget. That’s despite the government’s decision to abandon its tax cut for the highest earners on Monday in an effort to restore its fiscal credibility.

On Tuesday, there were almost 2,360 home loan products available, an increase of 4.4% from the low at the weekend, according to Moneyfacts. Still, borrowers have less than half the choice they had in December, the data show.