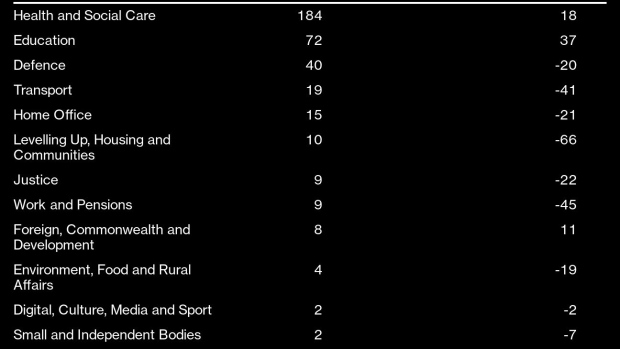 (Bloomberg) -- For the 8,000 people suffering from cystic fibrosis in the UK, Kaftrio is a miracle drug. For the cash-strapped National Health Service, it’s a foretaste of an unaffordable future.

Costing £100,000 ($123,000) a year per patient, Kaftrio could add hundreds of millions of pounds to the £180 billion annual NHS bill, a new liability even as the service struggles to manage its worst winter crisis yet. Excess deaths are soaring, ambulance waits are at record highs, patients lie for hours on trolleys, and stressed-out staff are striking over pay and conditions.

Spiraling costs are the threads that link innovations in health-care technology with Britain’s overcrowded hospitals. To afford one and fix the other, the NHS is increasingly desperate for an ever-bigger portion of the UK’s limited financial resources. But there is no spare cash. Policy makers are facing a brutal reality: either taxes are raised, free NHS services are cut, other government departments are effectively scrapped — or Britain’s health service breaks.

The NHS may be much-loved, but it links many of the UK’s problems. Record numbers of Britons are leaving the workforce through sickness, and an increasingly elderly and infirm population needs more treatment than ever for obesity, cancer, diabetes and other chronic conditions.

That holds back growth, squeezes government revenue and pushes up borrowing costs — limiting not just public funds needed to fix the health service, but investment across the board that Prime Minister Rishi Sunak says is central to reviving the economy.

The cost of the NHS just keeps rising. In the mid-1950s, shortly after the service was created, it cost 2% of GDP. By 2019, it was 10.2%. That was only manageable as public funds were diverted from defense to health and falling interest rates reduced the cost of servicing the national debt. Today, higher interest rates have added £40 billion to debt servicing and more money is being pledged on defense.

Yet, the demographic and technological trends remain. By 2067, the NHS will cost 13.8% of GDP, according to the Office for Budget Responsibility, the UK’s fiscal watchdog. To plug that gap, the government will need to find an extra £85 billion every year, in today’s money. That’s the same as the entire annual budget for the Department for Education.

“We have a horrible combination of record tax levels, very high borrowing, high interest rates and weak growth and we are still struggling to fund health services,” said Paul Johnson, director of the Institute for Fiscal Studies. “It’s pretty grim.”

Sunak knows the consequences of getting things wrong. He and Chancellor of the Exchequer Jeremy Hunt are currently attempting to repair Britain’s public finances after a run on the pound and bond-market upheaval during the short premiership of his predecessor, Liz Truss. Data on Jan. 24 showed the UK sank deeper into debt in December, with the budget deficit almost tripling in a year to £27.4 billion. With inflation still near four-decade highs, there remains no margin for a fresh policy error.

This story is based on interviews with senior NHS executives, experienced doctors and other stakeholders, many of whom spoke on condition of anonymity as they were not authorized to speak in public about sensitive issues. Their testimony, and the fiscal evidence, reveals that the UK government faces a huge task to resuscitate the NHS, arguably the world’s most famous health care system.

Inside the NHS, clinicians are acutely aware of the pressures. In the face of endlessly escalating funding demands, one orthopedic consultant joked darkly that the UK would soon turn into a small economy with a big health service attached.

Some doctors and consultants — NHS terminology for senior physicians — believe that non-urgent elective care may start to be rationed or means-tested in the near future to push wealthier patients into the private sector, as already happens with dentistry and opticians. Private practices do offer simple care once the preserve of family doctors, such as ear wax removal, treating ingrowing toenails and mole-mapping. Going private allows patients to skip long NHS waiting lists for hip replacements and knee surgery.

Sajid Javid, a recent former Tory health secretary and chancellor, wrote in The Times last weekend that “the 75-year-old model of the NHS is unsustainable.” He argued it could be necessary to pay for GP services, either up front or by means testing. Javid also recognized that his view may not be popular. “But we are at the crossroads, and I feel it needs to be said.”

At the heart of the problem is an impossible quandary: How to keep taxes down when health spending is growing faster than GDP? Meeting costs that are slowly overwhelming the economy was once possible — its share of public service spending increased from 20% to 26% in the two decades to 2019 — but there is little left to cut elsewhere, and the NHS can no longer cannibalize other public service budgets.

In any case, diverting resources was not enough in the austerity years after the financial crisis. As budgets tightened, NHS capacity was hollowed out, leaving the system well behind European peers.

According to the Health Foundation, a charity, the UK has 2.5 beds per 1,000 people, the second lowest of the 14 countries that were members of the European Union before 2004, and three practicing physicians per 1,000 people, against an EU14 average of 3.9. The number of CT scanners, MRI scanners and mammography machines is well below the OECD average. Capital investment in health was £33 billion below the EU14 average from 2010 to 2019.

Former Prime Minister Boris Johnson did increase annual spending by £12 billion in 2021, and during the pandemic the NHS increased both hospital consultant and nursing numbers by a little more than 10%. Yet the NHS is treating fewer patients than before the pandemic, research by the IFS found.

NHS England is estimated to have 13,000 beds occupied by patients who are fit for discharge but have nowhere suitable to go, leading to long waits for patients in ambulances outside hospitals. Ambulance response times have ballooned, with some heart attack victims waiting 93 minutes for help. To many patients, it feels like the NHS is broken.

One senior NHS England director insisted that the service is overwhelmed but not broken, arguing instead that staff numbers have only kept pace with escalating demands for acute care. The current crisis is primarily about the shortage of beds, the NHS leader said. Digital monitoring of patients at home is helping, but is not seen as a viable long-term alternative to increased funding. Capital investment is needed, the director insists.

The opposition Labour Party has promised extra funds if it wins the next election, due by January 2025, but says the money must come with “unsentimental reform.” That may help, because while the UK sits in the middle of a pack of peers in terms of spending as a share of GDP, according to the King’s Fund, IFS research shows that outcomes are worse.

“There are no easy answers or quick fixes to the challenges faced by the health and care system,” said Helen Buckingham, director of strategy at the Nuffield Trust. “We are getting what we pay for. Without investment in both staff and infrastructure, patients will continue to bear the brunt of these failures.”

The NHS, which employs 1.4 million people overall, is also an increasingly difficult place to work. In four of 12 months in 2022, mental health issues were the leading cause of employee absence, according to data from GoodShape, a workplace health and wellbeing provider. Some 130,000 positions were vacant in NHS England in June 2022, including 10,600 medical positions. Currently, medical school places in England are capped at just 7,500 per year. A 15-year workforce plan, to be published soon, is likely to recommend training more UK staff.

One pressing reform is to link the NHS better with social and community care, where many elderly patients are eventually discharged to; but that sector is run by cash-strapped local authorities that have had their own funding gutted during 13 years of Tory government.

Reform itself is no panacea. Labor-intensive industries like health cannot keep endlessly improving productivity. Yet staff costs account for half of the NHS budget and pay demands keep rising, as shown by this year’s NHS strikes.

Many of these pressures are not unique to the UK. New drugs cause financial strain everywhere, and populations grow older and sicker in many advanced economies. But the NHS tries to absorb all those costs in a centralized, taxpayer-funded model within a society that has voted for low-tax government for much of the past 40 years. For his part, Sunak has vowed to get waiting lists down but said little about the long-term.

Before Kaftrio was approved in 2020, people with cystic fibrosis often lived only until their mid-40s. Now they can live full, healthy lives. The NHS needs a similarly miraculous cure. With Sunak’s Tories flailing, the challenge may fall to Keir Starmer and his Labour party that founded the service in 1948. Even if he finds it, the cost will be eye-watering — and the side-effects will hurt.