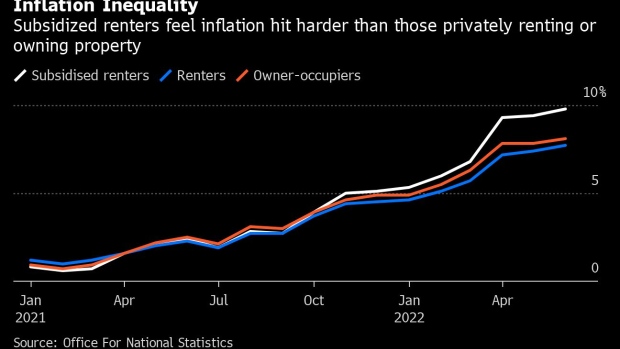 Britain’s low-income households are being hurt most by soaring prices, according to official findings that will add to pressure on the government to act.

They suffered an inflation rate of 8.7% in the year to June, the Office for National Statistics said Wednesday. That’s well above the 7.8% felt by high-income households. The gap between the two is the widest since 2010, when it was the wealthy who were paying more.

The figures highlight how a cost-of-living crisis is hitting British consumers unevenly, delivering a heavier blow to those who can least afford it and widening the gap between the rich and the poor.

Lower-income families spend a larger proportion of their resources on energy, food and drink, which have driven inflation higher.

“Inflation is pernicious,” Stuart Rose, a member of the House of Lords and chairman of the supermarket chain Asda Group Ltd., said on BBC Radio 4. “It erodes wealth. I want to look after those people who cannot afford to take the hit, and we know who they are.”

The figures show the experience of CPIH inflation for the second-poorest 10th of households and the second richest. That measure of price growth accelerated to 8.8% in July from 8.2% in June.

CPI inflation, the basis of the Bank of England’s target, surged to a 40-year high of 10.1%, fed by an increase in food and energy prices. The BOE expects the squeeze on consumers along with higher interest rates to push the economy into recession this year.

Those who received subsidies for rent were among the hardest hit, the ONS said. The gap between that group and those who own their homes was the widest since records began in 2006.

A report yesterday showed wages adjusted for inflation are falling at their fastest pace on record. The Resolution Foundation expects low-income households will have to cut back on non-essential spending by 25% to cope with energy bills likely to top £4,000 a year starting in January.

“There is no escaping this cost-of-living crisis,” said James Smith, research director at the think tank. “It will take many months, and much more living standards pain, before inflation starts to ease.”