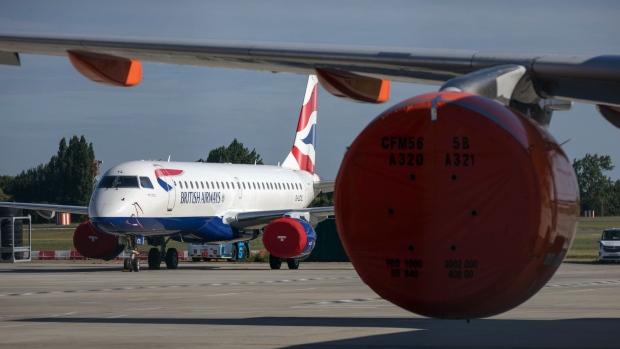 A passenger aircraft, operated by British Airways, a unit of International Consolidated Airlines Group SA (IAG), stands on the tarmac at London Southend Airport, part of the Stobart Group Ltd., in Southend-on-Sea, U.K., on Tuesday, July 7, 2020. EasyJet Plc plans to shutdown bases in Stansted, Southend and Newcastle in the U.K. , Bloomberg

British Airways and partner American Airlines Group Inc. will begin offering coronavirus tests to some flyers to London from the U.S. in the biggest push yet to kick-start travel on vital trans-Atlantic routes.

Free tests will be offered ahead of American Airlines flights from Dallas and BA trips from New York and Los Angeles starting Nov. 25, the two carriers said in a statement on Tuesday. Passengers who volunteer will take tests 72 hours before departure and on arrival at London’s Heathrow airport, while a kit will be provided for a third check three days after that.

The airlines plan to collect over 500 results that will then be verified by independent scientists, BA Chief Executive Officer Sean Doyle said on a call with reporters. The aim is to demonstrate how testing could replace quarantines as a way to control the spread of the coronavirus and be less of a disincentive for travelers, he said.

The move could even improve compliance given high numbers of people don’t follow isolation requirements, according to the CEO.

With a significant portion of business- and first-class passengers, trans-Atlantic travel is the most lucrative aviation market, and carriers that ply the route are eager to kick start demand as quickly as possible. While Covid-19 cases are surging in both the U.S. and the U.K., preparations are underway for when the latest phase of the pandemic eventually eases.

Other airlines are also running trials. United Airlines Holdings Inc. has begun a four-week offer of free pre-departure coronavirus tests to all passengers between Newark, New Jersey, and Heathrow. One passenger scheduled to depart the U.S. on Monday night tested positive and was denied boarding.

Neither the BA/AA trial or the United initiative are backed by the U.K. or U.S. governments, which would need to agree on a bilateral regime. Both sides face other distractions however, with President Donald Trump disputing his recent election defeat to Joe Biden and the U.K. in crunch talks with the European Union over the country’s exit from the bloc.

IAG SA-owned British Airways and American Airlines said they used to operate as many as 111 flights a week between London and New York before the pandemic upended travel. The airlines now have 14 weekly trips, as travel restrictions and quarantines mean all but the most essential travel remains off limits.

BA’s service between Heathrow and New York’s John F. Kennedy International Airport generated US$1.2 billion in the year through March 2019 -- the only route globally to cross US$1 billion, according to flight-data provider OAG.