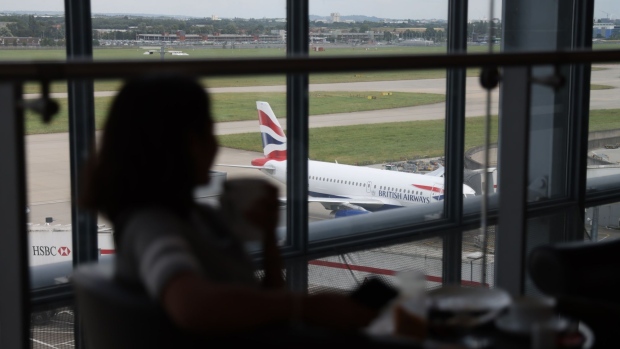 (Bloomberg) -- British Airways is nearing a deal with one of the unions representing check-in employees, according to a person familiar with the matter, potentially avoiding further disruption after having to scrap thousands of flights due to a staff crunch.

Talks with the Unite union have progressed and an agreement is close, said the person, who asked not to be identified since the terms are still being finalized. The union previously said check-in staff represented by Unite at the main London Heathrow hub would walk out during the peak vacation period after the airline refused to reverse a 10% pay cut imposed during the pandemic.

BA, a unit of IAG SA, has been among the carriers hardest hit by a staffing crunch that’s being felt across the region, after dismissing 10,000 workers at the peak of the Covid pandemic. On Wednesday, the airline said it would cancel another 10,300 flights through the summer season, taking the total cancellations from April to close to 30,000 flights.

A British Airways spokesperson couldn’t be reached for comment outside of office hours.

Earlier Wednesday the carrier said it was hiring Dutch rival KLM’s chief operating officer with a focus on improving operational resilience and lifting headcount to ease the shortfall.