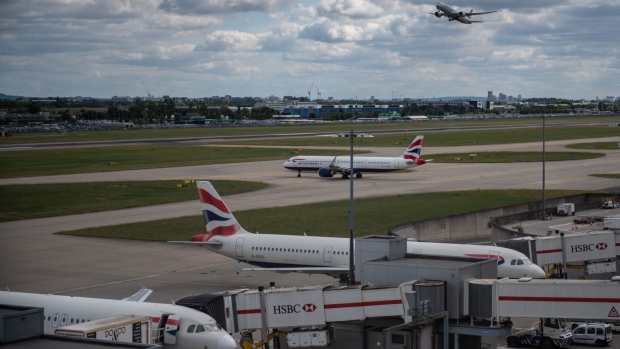 Passenger aircraft, operated by British Airways, a unit of International Consolidated Airlines Group SA (IAG), on the tarmac at London Heathrow Airport in London, UK, on Monday, June 13, 2022. Heathrow airport said its policy of carefully matching flight availability to resources as travel rebounds has been vindicated, citing a lack of disruption even as customer numbers reached their highest level since the start of the pandemic. , Bloomberg

(Bloomberg) -- British Airways will pull more flights from its summer schedule as the carrier looks to reduce last-minute cancellations amid continuing staffing shortages and long queues at airports.

The unit of IAG SA has now reduced its timetable by 11% through October, compared with a 10% cut for the period announced in May. The UK government has waived rules that require airlines to use takeoff and landing slots or lose them the next season, urging companies to scrap services where necessary.

“As the entire aviation industry continues to face into the most challenging period in its history, regrettably it has become necessary to make some further reductions,” a BA spokesman said by email.  “We’re in touch with customers to apologize and offer to rebook them or issue a full refund.”

Airports and airlines across Europe are slashing capacity and canceling flights after being caught flatfooted by a surge of demand following two years of virtually no travel.