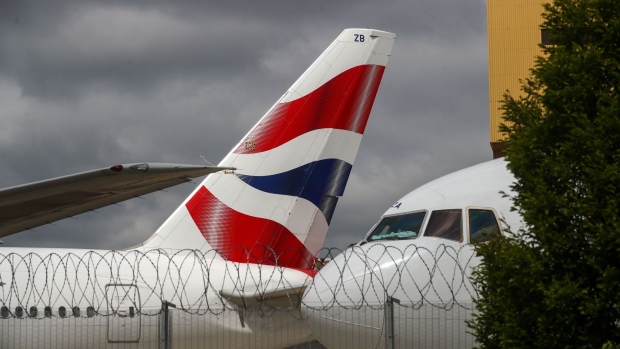 British Airways livery sits on the tail-fin of a passenger aircraft, operated by British Airways, a unit of International Consolidated Airlines Group SA (IAG) grounded at London Heathrow Airport in London, U.K., on Monday, June 8, 2020. The U.K. is pressing ahead with a two-week quarantine on international arrivals, a move British Airways and other carriers say will devastate tourism and wreck any chance the summer holiday season could spark a recovery from a virus-induced slump. Photographer: Simon Dawson/Bloomberg , Bloomberg

British Airways parent IAG SA settled a dispute with the U.K. over a policy to force visitors to self-isolate for 14 days, saying it will withdraw the London litigation when the government updates its plan later on Friday.

The agreement came together just hours after proceedings began in London’s High Court. British Airways attorney Tom Hickman said the carrier agreed to drop its action once the official guidance is released.

The quarantine was introduced in early June to guard against a resurgence in coronavirus cases as lockdowns eased. But just before the court hearing began, Transport SecretaryGrant Shapps said the U.K. would scrap the requirements for people arriving from over 50 countries.

The original approach had been criticized by airlines and holiday firms, including Easyjet Plc and Ryanair Holdings Plc, who supported BA’s lawsuit. At Friday’s hearing, the airlines said the government’s own scientific adviser, Professor John Aston, noted that compulsory isolation should only be imposed “on people arriving from countries that have a higher prevalence” of coronavirus.

The government was entitled to take a “precautionary approach,” government lawyer James Eadie said, and took account of the scientific advice. Even the scientists believed that judging the “tipping point” at which border controls should be introduced was not a scientific question “but a matter of policy,” he said.