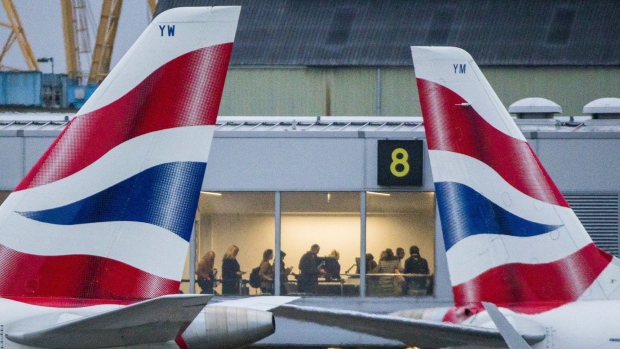 British Airways suspended operations at its second London hub at Gatwick airport as the airline industry enters deep hibernation to weather the impact of the coronavirus.

With just over a week to go until the Easter holidays, the IAG SA-owned carrier is contacting customers with the news that flights are off, a spokesperson said by email. Gatwick largely serves British Airways’ leisure travelers, and some flights are still operating from its larger Heathrow hub.

The Gatwick halt mirrors moves by rivals to preserve cash. EasyJet Plc announced Monday that it had parked all its planes, while Irish low-cost carrier Ryanair Holdings Plc last week announced plans to ground over 90 per cent of its fleet in coming weeks.

In France, Orly airport outside the capital will shut down at the end of the day Tuesday, with all remaining flights transferred to Paris-Charles de Gaulle, where five terminals have been closed and three remain in operation, according to operator Aeroports de Paris’s website. Air France-KLM has drastically cut back on flights, with remaining service mostly for repatriation missions for French citizens abroad. 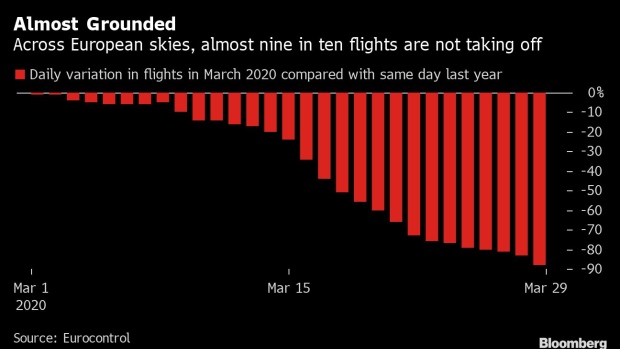 Holidaymakers flying out of Amsterdam will now have to wait until November next year for the opening of Lelystad Airport, a second hub for the Dutch capital, due to the outbreak, according to Infrastructure Minister Cora van Nieuwenhuizen.

Earlier this month, IAG said it would reduce capacity by at least 75 per cent in April and May. The carrier group includes Ireland’s Aer Lingus, former Spanish flag carrier Iberia and discount carriers Vueling and Level.

The International Air Transport Association estimates airlines worldwide could take a US$252 billion hit to revenue this year from the pandemic, warning that a liquidity crunch is just around the corner and urging governments to take “massive action” to keep the industry functioning. IAG says it has sufficient cash and hasn’t asked for a bailout from the government.

Chief Executive Officer Willie Walsh said March 16 that the carrier has cash and cash equivalents of 7.35 billion euros (US$8.1 billion). While the U.K. has ruled out a broad bailout of the aviation industry, British Airways might qualify for assistance through the government’s Covid Corporate Financing Facility, part of a 330 billion-pound (US$390 billion) national program open to companies with an investment-grade credit rating. British Airways has the lowest non-junk rating, with Easyjet ranked higher.

--With assistance from Tara Patel and Ellen Proper.