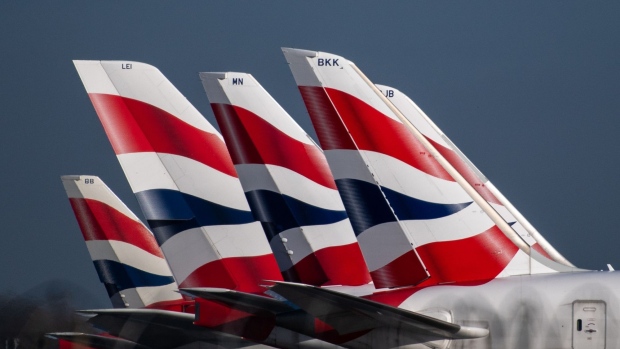 The British Airways livery on the tail fins of passenger aircraft at London Heathrow Airport in London, U.K., on Wednesday, Feb. 23, 2022. International Consolidated Airlines Group SA, the parent company of British Airways, are due to report results on Friday. , Bloomberg

(Bloomberg) -- Unions representing some British Airways workers at London Heathrow airport said members voted in favor of striking over a pay dispute, creating a fresh headache for the carrier this summer and threatening more chaos for UK travelers.

BA, owned by IAG SA, has been among the hardest hit by an industry-wide shortage of staff, which has forced the carrier to pare its schedule and reduce capacity in what is typically the busiest travel season for European carriers. Surging inflation, coupled with a rapid rebound in travel, has prompted aviation industry workers to threaten strikes to increase wages and reverse pandemic-era cuts.

BA said it was disappointed by unions threatening to strike, adding that it offered a 10% payment to compensate for the cuts during the pandemic.

“We are fully committed to work together to find a solution, because to deliver for our customers and rebuild our business we have to work as a team,” a BA spokesman said in a statement. “We will of course keep our customers updated about what this means for them as the situation evolves.”