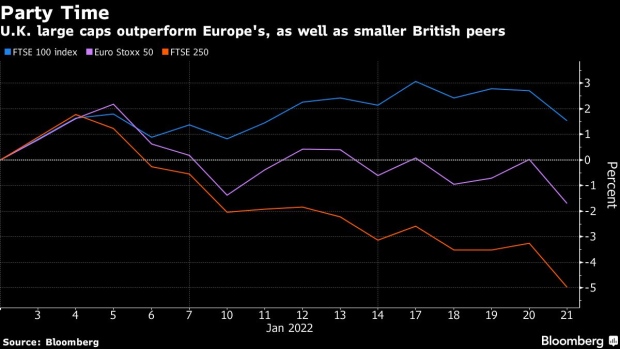 Skyscrapers and buildings on the City of London skyline at dusk in London, U.K., on Thursday, Oct. 21, 2021. U.K. Prime Minister Boris Johnson said the City of London will prosper outside the European Union, noting job losses and disruption to capital flows have been lower than feared. Photographer: Chris Ratcliffe/Bloomberg , Bloomberg

(Bloomberg) -- While Boris Johnson’s premiership is in turmoil, the country’s stock market has shrugged off the political drama and is now outpacing all major developed equities.

After years of underperformance, the FTSE 100 index is up 1.5% this month, while most major gauges in the U.S. and Europe have fallen. Casting Britain’s political dramas aside, the blue-chip gauge has benefited mostly from a large exposure to so-called value stocks.

With bond yields rising, investors have discounted future earnings at a higher rate, pushing them toward cheaper sectors such as banks, plenty of which can be found in the U.K. The British benchmark is also rich in oil stocks such as Royal Dutch Shell Plc and BP Plc, which have been boosted by the soaring price of crude.

These market forces “transcend the leadership debate and, for now, keep politics as an important thing, but not the most important thing,” said Wesley Mccoy, who oversees the U.K. Value Equity fund at asset manager Abrdn.

Helping the U.K. growth-to-value trade has been the fact that the Bank of England is already in a rate-hiking cycle, whereas the European Central Bank has committed not to raise rates in the foreseeable future, according to Alexandra Jackson, manager of the Rathbone U.K. Opportunities Fund.

Another boon for the FTSE 100 is its large make-up of so-called defensive shares such as health care, staple goods and telecoms at a time when monetary tightening is fueling uncertainty. Morgan Stanley sees “stars aligning” for U.K. equities, strategists led by Graham Secker wrote in a note.

Simple valuation metrics also favor Britain. The FTSE 100 Index trades at a 17% discount to the Euro Stoxx 50 Index in terms of its forward price-to-earnings ratio, although that’s less than the 26% gap seen in September. And a forward dividend yield of 3.9% is about twice that of global peers.

Still, the FTSE 100’s good start to the year isn’t entirely a reflection of U.K. corporate strength, with the benchmark owing most of its gains to London-listed international companies. Index members generate about 75% of their revenue abroad, according to calculations from Goldman Sachs Group Inc.

The more domestically focused FTSE 250 index has fallen 4.6% in January compared with a 2.5% decline for Europe’s Stoxx 600.

And for some market participants, there are concerns that the factors that have benefited the FTSE 100 this month are now priced in.

“We don’t believe the recent outperformance of U.K. equities has much further to go,” HSBC strategist Max Kettner wrote in a note, “In fact, it has already surpassed our model estimates.”