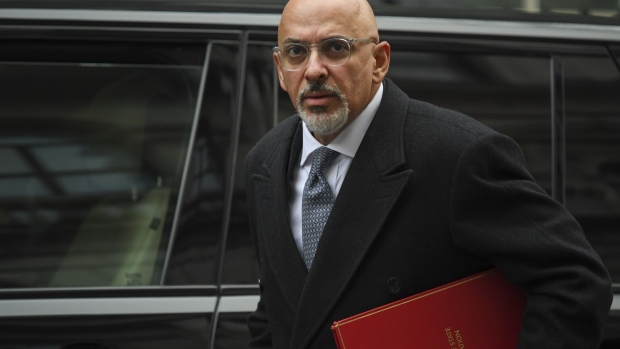 Nadhim Zahawi, U.K. education secretary, arrives ahead of a weekly cabinet meeting at number 10 Downing Street in London, U.K., on Tuesday, Feb. 8, 2022. U.K. Prime Minister Boris Johnson's premiership is at a tipping point after 5 key aides quit last week and as Conservative members of Parliament mull whether to demand a vote of confidence in his leadership. , Bloomberg

(Bloomberg) -- UK business groups welcomed a commitment by new Chancellor of the Exchequer Nadhim Zahawi to cut taxes after Rishi Sunak resigned from the post in protest over Prime Minister Boris Johnson’s leadership.

Zahawi signaled after taking the job Tuesday that he’s open to reversing a planned increase in levies on business as part of a broader effort to rein in or reduce taxes. While Sunak was seen as an advocate of fiscal probity, the government is seeking ways to ease the growing inflation crisis.

The new chancellor has a “golden opportunity to prove that he is pro-business” by reversing the “damaging tax rises” hitting the economy, said Martin McTague, national chair of the Federation of Small Businesses.

Whether any of Zahawi’s plans go into effect may depend on how long Johnson stays in office. After Sunak and Health Secretary Sajid Javid resigned Tuesday, more and more former Johnson allies are calling on the prime minister to quit.

The corporation tax is due to rise to 25% from 19% next spring, but Johnson and Sunak reportedly disagreed over whether to go ahead with the increase. It’s one of several big calls Zahawi would have to make in the coming months, assuming he retains the role, with decisions about payroll taxes and further support to help with Britain’s cost-of-living crisis looming.

The British Chambers of Commerce called for a reduction on the value added tax on energy, after a surge in costs this year. Small firms, including retailers, have long been calling for relief on business rates, a form of property taxes.

“The new chancellor can make a permanent, positive transformation by taking all small businesses out of the rates system,” McTague said. “Business costs and taxes are sky high and rising, and the cost-of-living crisis cannot be solved without addressing that root cause.”

Small firms, which make up the vast majority of the UK’s businesses, can be especially vulnerable during turbulent times; many are still recovering from Covid-19 lockdowns. Michelle Ovens, founder of SME lobbyist Small Business Britain, welcomed a review on corporation tax, but said more needs to be done to protect British companies.

“I would hope that a cut to VAT is also being considered,” Ovens said. “Not only would it ease some pressure on customers and stimulate demand for businesses, but it can be deployed at speed, creating an instant impact.”