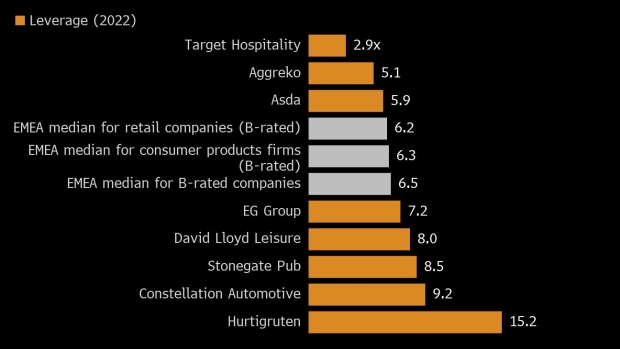 Customers inside an Asda store, trialing new sustainability initiatives, in Middleton, U.K., on Thursday, Oct. 29, 2020. Walmart Inc. is pulling out of the cutthroat U.K. grocery market after 21 years, agreeing to sell control of grocer Asda to TDR Capital and two brothers who made their wealth in gas stations. Photographer: Anthony Devlin/Bloomberg , Bloomberg

(Bloomberg) -- TDR Capital has raised billions of euros for a new buyout fund, adding resources for deals and to support its portfolio of consumer-related companies at a time when the sector is under pressure from rising costs.

The British firm secured €4.2 billion ($4.3 billion), according to a person familiar with the matter. It will use the money to hunt for new deals and also for bolt-on acquisitions for its current businesses, the person said, asking not to be identified because the information is private. A spokesperson for TDR declined to comment.

Fundraising has become harder for private equity firms. As valuations rose across asset classes, limited partners found themselves over-allocated to private equity and cut back on their exposure. Funds that recently closed their buyout vehicles fell short of their targets and PE funds are acknowledging that fundraising cycles will become longer. But TDR may reach the fund’s hard cap of €4.5 billion in the coming months, the person said.

The firm, which has been behind some of the most high-profile buyouts in the U.K., has significant exposure to the retail and consumer, some of which may feel pressure as economies struggle.

A fair chunk of those bonds are now trading near or in distressed territory after surging inflation and rising interest rates fueled a sell off across global markets.

The cost of insuring Asda’s junk debt spiked to its highest on record due to the UK’s recent budget chaos and is now signaling a 51% chance of default within the next five years. Hurtigruten is already in talks with creditors even after TDR pumped in about €170 million euros over the last 14 months, money used to help it recover after Covid. Its equity book value was negative €482 million as of Sept. 30, it said Tuesday.

Also, EG Group Ltd., the forecourt retailer founded by Zuber and Mohsin Issa and jointly owned by the brothers and TDR, said this week it’s actively exploring a range of deleveraging options. The company has a maturity wall in 2025, when $8.5 billion of its debt come due, according to Fitch Ratings.

TDR’s portfolio also includes companies less exposed to economic cycles, such as an education provider and a supplier of mobile power solutions.

One of its companies -- Arrow Global Group Ltd., an investor and manager of non-performing loans -- might even benefit in a downturn. Also, the inflation squeeze won’t affect all companies equally, with analysts at independent credit research firm Spread Research suggesting that David Lloyd might fare better than other gyms because its client base has more disposable income.

But these companies represent a minority in TDR’s collection of firms, which is dominated by leisure, travel and retail companies.

Another example is Stonegate Pub Co. Group, the UK’s largest pub company, with over 4,500 sites. That sector is facing a tough year because of inflation and higher costs.

Stonegate’s capital structure includes £2.16 billion of junk-rated bonds, now trading at a discount of around 8%, according to Bloomberg pricing.

“Retailers face a number of issues,” said Richard Etheridge, an analyst at ratings agency Moody’s Investor Service. “They have to manage their cost inflation, energy bills has gone up an extraordinary amount. Staffing and finding staff has been very difficult. Higher leverage and higher interests costs automatically means that companies have less room to maneuver if things go wrong.”

--With assistance from Abhinav Ramnarayan and Laura Benitez.