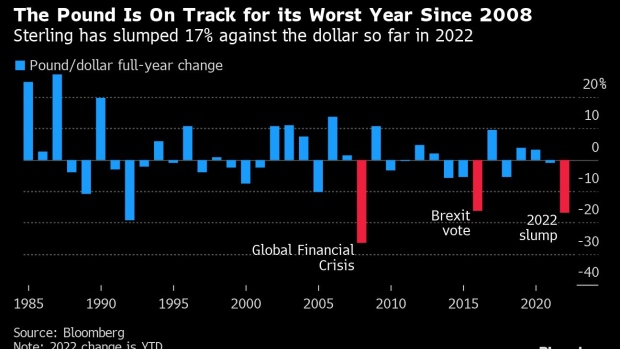 A customer browses items on a market stall selling hair accessories in Barking, UK, on Tuesday, Sept. 13, 2022. As the UK enters a period of public mourning after the death of Queen Elizabeth II, data releases are likely to show a temporary reprieve in inflation and a jump in wage growth. Photographer: Chris Ratcliffe/Bloomberg , Bloomberg

(Bloomberg) -- The pound’s slump shows little sign of ending amid the ongoing story of dollar strength as well as concerns about UK economic policy. The latest leg down has taken its decline so far this year to 17%, surpassing the 16% loss it suffered in 2016, when the country voted to leave the European Union. It means sterling, already at the lowest since 1985, is on track for its worst year since the Global Financial Crisis in 2008, when it plunged 26%.