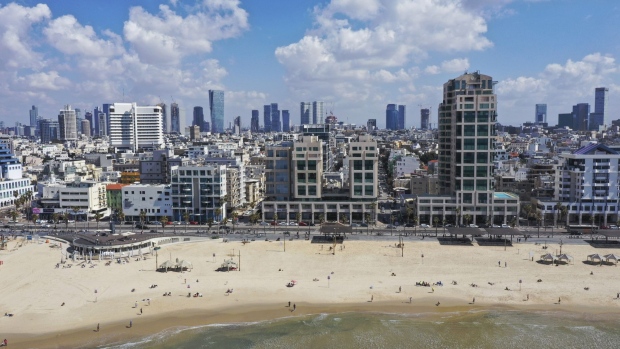 Beachgoers relax on the beach in this aerial photograph taken in Tel Aviv, Israel, on Friday, March 5, 2021. Israel's vaccine campaign raced ahead of the world after the government inked a deal with Pfizer Inc. in exchange for data on the inoculation program. , Bloomberg

(Bloomberg) -- Virgin Atlantic Airways Ltd. reported a jump in demand for flights to Israel after the country was included on the U.K.’s “green list” for the reopening of overseas leisure travel.

A rush of several hundred bookings since Friday spurred a 250% jump in week-on-week sales on the route from London Heathrow airport to Tel Aviv, a Virgin Atlantic said. The airline, which currently operates flights four times a week, plans to go daily in June and twice-a-day in July as demand builds.

Airlines have reported a surge in interest for flights to the 12 nations and territories where Britain will permit relatively open travel starting May 17. Ryanair Holdings Plc has added 225,000 seats to Portugal, it said on Monday, while EasyJet Plc, Wizz Air Holdings Plc and tour operator TUI AG have added capacity to places including Gibraltar, Iceland and the Portuguese island of Madeira.

While some of the countries still have their own curbs, Israel is expected to welcome tourists in groups by late May, with vaccinated visitors requiring an antibody test.