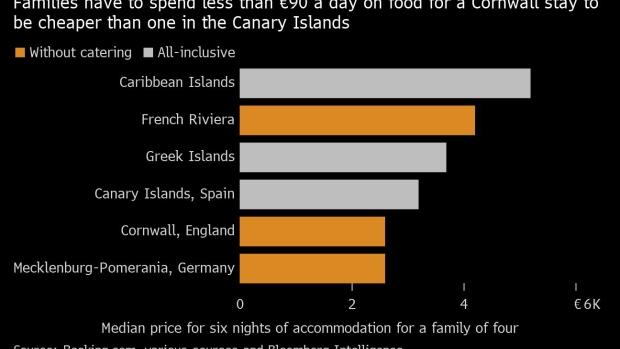 British families used to holiday in the Canary Islands instead of Cornwall in search of hotter weather. Now, it’s also becoming a money-saving strategy to escape spiking food and fuel prices at home.

Half of Britons see an all-inclusive resort holiday abroad as a cheaper alternative to a vacation in the UK, according to an On the Beach survey carried out between Aug. 17 and 18. British travelers have helped drive hotel bookings in Spain to near pre-pandemic levels, and international-tourist arrivals at Greece’s main airports have surpassed 2019 numbers.

While the median price for six nights of accommodation for a family of four in Cornwall is lower than in the Canaries and Greek islands, packages to the latter destinations often include food and beverage costs, and sometimes even some entertainment -- and sunnier beaches. Booking.com data analysed by Bloomberg Intelligence showed a trip to Cornwall would be the cheaper option only if families spend less than 90 euros on food and drinks every day. That might prove hard to do amid record increases in the price of everything from sausages to butter in the UK.

“The rising cost of fuel, food and other consumer goods has made Britain an expensive destination for its citizens to take a break in,” said Zoe Harris, chief customer officer at travel agency On the Beach. “Spending £3,000 on a week-long UK break is absolute madness when you can go all-inclusive to Cyprus for half that price.”

Staycations are no longer the obvious option for Britons given the cost-of-living crisis, with low-cost flights available for under 100 euros and travel agencies offering cheaper deals abroad. On the Beach has an online calculator that shows potential customers all-inclusive holiday deals in resorts like Portugal or Turkey that are on average 49% cheaper than destinations like Devon. Also, the most expensive all-inclusive vacation package in the Greek islands on Booking.com in August was still cheaper than Cornwall’s priciest option, according to Bloomberg Intelligence.

“People can save hundreds of pounds more on holidays to destinations where they can take in new cultures, experience different food, and benefit from a far higher chance of decent weather,” Harris said.