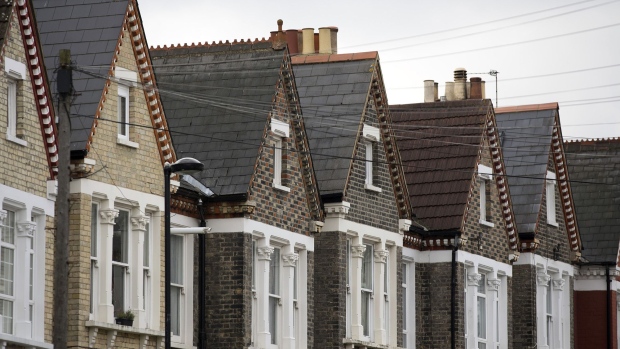 Chimney pots stand on the rooftops of residential properties in London, U.K., on Monday, March 17, 2014. U.K. Chancellor of the Exchequer George Osborne plans to spur construction in his budget by extending the Help-to-Buy program for new homes to 2020 and fostering the expansion of a commuter town southeast of London. Photographer: Simon Dawson/Bloomberg , Photographer: Simon Dawson/Bloomberg

(Bloomberg) -- The U.K. is poised to increase grants for homeowners who rip out their fossil fuel boilers and replace them with greener heat pumps, as Boris Johnson’s government tries to overcome one of the biggest hurdles to achieving its goal of carbon neutrality by 2050.

Ministers will next week announce grants of at least 5,000 pounds ($6,840) for people who install heat pumps, as a way to cut the cost of the green -- but expensive -- technology, according to two people familiar with the matter.

Heat pumps, which use electricity to absorb heat from the air and transfer it into radiators and underfloor heating, typically cost about three times as much as a gas boiler. But their adoption will be pivotal to the U.K. meeting its commitment to reach net zero greenhouse gas emissions.

The announcement will come weeks before the U.K. hosts the next key round of United Nations climate talks in Glasgow, which Johnson wants to use to put Britain at the forefront of the global effort to tackle global warming.

The U.K.’s Clean Heat Grant, which is set to start in April 2022, will be more than the 4,000 pounds that the government consulted on last year, the people said on condition of anonymity. One said it’s likely to be between 5,000 pounds and 6,000 pounds per household.

The higher grant will go some way to addressing concerns over the price difference with gas boilers, the current staple of domestic heating in the U.K. but which the government wants to phase out.

Johnson weighed in on the cost issue in July, saying: “Let’s be frank, these things cost about 10 grand a pop. This is a lot of money for ordinary people.”

The plans will be set out as soon as Monday when the government unveils its months-overdue Heat and Buildings strategy. Johnson has set a target to install 600,000 heat pumps a year by 2028 -- a 20-fold increase on current levels.

But there are considerable challenges, on top of the cost. They only work in well-insulated homes, and according to the Onward think tank, there are only 1,200 plumbers in the U.K. capable of installing them.

The government’s Heat and Buildings strategy was due to be published at the start of this year, but was delayed in part by a row between the Treasury and Johnson’s office over who should foot the cost of heat pumps.

Business Secretary Kwasi Kwarteng had been pushing Chancellor of the Exchequer Rishi Sunak to raise the grant level to as much as 7,000 pounds.

Now it’s expected to be unveiled against a backdrop of record energy prices as the world emerges from the pandemic, with consumers already fretting about higher energy bills and many suppliers going bust.

Both Johnson and Kwarteng have said volatile prices underscore the need for the U.K. to wean itself off fossil fuels in the long term.