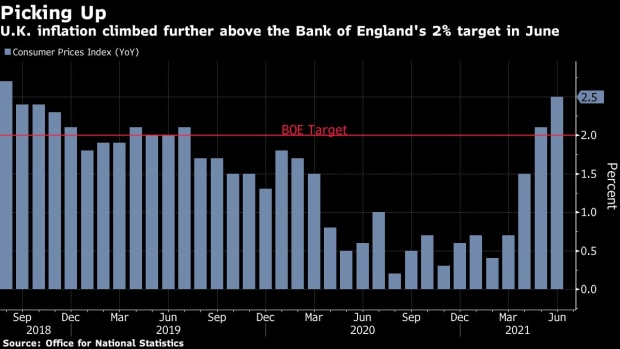 Ben Broadbent, deputy governor for monetary policy at the Bank of England (BOE), pauses during the bank's quarterly inflation report news conference in the City of London, U.K., on Thursday, May 2, 2019. The BOE signaled that the market is slightly underpricing the outlook for interest-rate increases over the next three years as long as Brexit goes smoothly. , Bloomberg

(Bloomberg) -- Bank of England Deputy Governor Ben Broadbent said policy makers may be right to overlook a surge in inflation now, arguing that many of the increases are likely to be temporary.

The remarks tip the balance on the U.K. central bank’s Monetary Policy Committee away from paring back stimulus for now and prompted traders to push back bets for the first interest rate rise since before the pandemic. He’s the sixth BOE official to weigh in on an unexpected jump in consumer prices over the bank’s 2% target in the past two months.

“I’m not convinced that the current inflation in retail goods prices should in and of itself mean higher inflation 18 to 24 months ahead, the horizon more relevant for monetary policy,” Broadbent said in the text of a speech released Thursday.

While Broadbent acknowledged that prices are likely to linger above the target this year, he said those gains are unlikely to persist. He noted that much of the inflation was due to rising oil prices and that lumber had fallen from its recent highs, making a negative contribution to prices from those categories probable early next year.

“What, in view of all this, is the appropriate policy response to the current inflation?,” Broadbent said. “Most of the overshoot relative to target in the latest CPI numbers -- more than all of it, on some measures -- reflects unusually strong inflation in goods prices.”

“If this was only a story about global goods prices -- and depending how confident you were in its transitory nature -- I think the answer could well be ‘nothing.’”

The comments set the ground for the BOE’s next decision on monetary policy due next month. Officials will revise inflation and growth forecasts for the U.K. economy on Aug. 5. They’re on track to deliver 150 billion pounds ($206 billion) of stimulus in the form of bond purchases this year.

Last week, two members of the rate-setting panel called for a debate on reining in that stimulus, estimating inflation may jump close to 4%. Governor Andrew Bailey last week said he wouldn’t be rushed into a response on rising prices.

Broadbent came down firmly on the side of those who want to see more evidence of inflation picking up before acting. He said the more important driver of inflation over time is aggregate demand and that he’s focusing on developments in the labor market to assess how quickly the economy is rebounding from its worst slump in three centuries.

He noted a “mismatch” between where workers are and the location of available jobs -- both in terms of geograpic locations and the sectors of the economy that are expanding rapidly.

“It is striking to me that you have seen this big growth in vacancies even while there are millions of people on furlough,” Broadbent said in response to questions after his speech. “All this domestic mismatch could be more important. It could effectively mean that unemployment can’t fall as far as we thought it could.”

(Updates with comments from the speech.)